Nov15 Comments Off on Happy Release Day! #DragonsWeb is here. 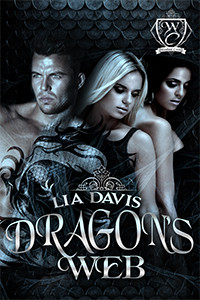 Cayden stepped out the back door of his two-story home in Woodland Creek and breathed in the crisp, fall air. The smell of burning wood from his neighbors’ fireplaces mingled with the scent of falling leaves and clean mountain breeze. It was soothing to the man, but his dragon paced restlessly within, wanting to break free and stretch out his wings. It’d been too long since he’d shifted, and he would have to do it soon.

However, he couldn’t go far. At least not for long. Henry Carter had moved into town and played the concerned uncle with his niece, Nyna. Cayden had never trusted the man. There was something about him that set off all of Cayden’s warning bells.

The morning of the day Nyna’s father died, Cayden had made a promise to David to keep her safe. It was the last phone conversation he had with his friend. Cayden fisted his hands and let out a low growl. The police still didn’t have any leads on the whereabouts of the killer, nor had they located the gun that had killed both of Nyna’s parents. In fact, they’d stopped working the case six months ago, saying the trail had run cold.

Cayden didn’t agree. The weapon was out there. Somewhere. Plus, he didn’t believe they’d searched every possible lead. He wouldn’t rest until he found the bastard who took Nyna’s parents away from her.

Since meeting the small, blonde human, he’d developed feelings for her, and had started to believe that she could be the one to break his curse. Nyna had a pure, kind heart and a beautiful soul. She was always able to find the positive in everything around her. He found it hard to stay away from her and used any excuse to see her. Including going to her bookstore three days a week to write.

The click of a door drew his gaze to the small, brick house diagonally across the street from his own. The beautiful blonde who haunted his thoughts night and day exited her home, locking the door behind her. He smiled around his coffee cup as he watched her walk down the sidewalk toward Old High Street where her bookstore was located.

Her modest curves called to him like she was casting a spell over him with each swing of her hips.

Suddenly, an image flashed in his mind. Premonition. Like a thirty-second clip from a movie, the vision both alarmed him and pushed him into protective mode. The face of Kara Mitchell burned into his brain. The female had broken Nyna’s heart once. He’d be damned if he let her do it again.

He entered his living room and opened the top drawer to his desk. Inside lay a scrying mirror. Pulling it out, he rested it on the desk and placed his right hand on the top right corner. “Show me where Kara is.”

An image of a black cat prowling outside Nyna’s bookstore formed. Cayden growled. Why the hell hadn’t he scented her? He should have been able to pick up on her. Unless she’d just arrived in town and went straight to the store to wait for Nyna.

The female wasn’t going to come back after eighteen months and screw with Nyna’s emotions. She’d had enough to deal with since her parents’ deaths. Cayden wasn’t going to allow any more heartache to come to his chosen partner. Even if it meant he had to claim her to protect her.

With inhuman speed, he made it to the bookstore before Nyna and found the black cat. When she saw him, she hissed and pawed at him. He smiled but left the humor from his features, the grin more feral than anything. “You and I need to talk.” 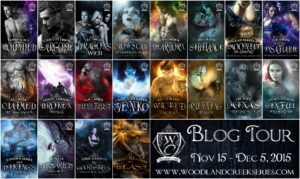 The Woodland Creek series is going on tour. For tour stops CLICK HERE.