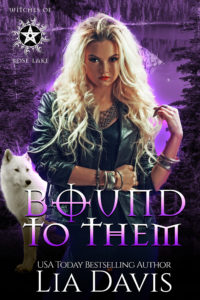 Goodreads reviews for Bound to Them

The crack of gunshots echoed around me, ricocheting off the tree trunks as I ran through the forest with no set destination. Well, I had a final destination, and it wasn’t my grave.

Although I hadn’t planned to leave so soon. At least not until I knew more about Sunshine Lives, the human-run organization that aided in hiding hybrids like myself and keeping them off the council’s radar. According to the magical council, hybrids were dangerous and needed to be put down.

Hence why I had Hunters chasing my ass. And I’d keep running, leading the assholes far away from my sister and the Carter Moon Pack. My heart broke in a million pieces for having to leave Cassia behind, but it was the only way to keep her safe and get the Hunters off her trail. We knew the day would come that we’d separate. It was the only way. Together, we were too powerful and like a beacon to the Hunters.

I screwed up royally by going outside of the protective wards of Pack land and was noticed by the Hunters. Now my sister and the wolf Pack that protected us the last few years were in danger. I had no choice but to run.

Jumping over a fallen tree, I used my heightened senses and speed to stay far enough ahead of the Hunters where they couldn’t catch me but not too far where they think they lost me. The last thing I needed was for them to turn back toward the Carter Moon Pack. They would surely tear the pack apart, searching for Cassia.

I had a plan…sort of. I would find Sunshine Lives HQ and join their fight for taking down the cruel bastard that the head of the council—Harrison Beck.

The smell of fresh water met my nose while my elemental magick tingled with awareness. My lips lifted in a slow, wicked smile. I could control all things water and the weather. It was all part of my witchy side. My speed and super-senses came from my wolf half. I was a deadly combination of magick and beast.

Another gunshot sounded much too close behind me. Pushing my legs to go faster, I raced ahead of the turned right at the next large oak, going off the main trail. I’d hoped to slow the fuckers down while I formed a plan on where the hell I was going. At least where I would lead the Hunters.

I may be a wolf, but that didn’t mean I had a good sense of direction. Damn.

I had planned to hop on a bus in a few months, but the Hunters had tracked me down right outside of Pack territory. I needed to shake them off my trail before I made the trip to Sunshine Lives’ HQ in California. Leading the bastards to the organization would be counterproductive. Not to mention, dumb as fuck.

I skidded to a stop as a large leopard jumped down from a tree a few yards ahead of me. The large black and gold spotting beast snarled and crouched as he stalked closer. My heart lurched in my throat and I called my magick from deep inside me. It warmed and simmered just under the surface while spreading out to my arms and hands, waiting for my command.

My sensitive hearing picked up on at least three sets of footsteps behind me, closing in. Luckily, we were close enough to the stream I could pull from it. Raising my hands, I called to the water. The leaves in the trees above us shook and the wind picked up. The water from the stream raced toward me, stopping a few inches from my body. Then I swirled my hands in front of me, making the water spin into a large sphere.

The leopard’s eyes widened, and he backed up while crouching low and growling. That’s it, kitty, be afraid. When the other Hunters rushed through the thick brush, I broke off pieces of the liquid sphere and formed arrows with the water, making them solid spears of ice. Each arrow pointed at a Hunter while the sphere spun in front of the evil spotted kitty.

The leopard tried to move, but my ball of water followed him.

The click of a hammer being cocked snapped my attention to Hunter with midnight black hair and eyes just as dark. Our gazes locked as he aimed right at me. Bastard. A fierce growl erupted from me and I screamed as I pushed all my energy outward. White light blasted from me, shooting out in all directions, and the water arrows jetted forward as if they were shot from an air bow.

At the same time the dark-haired Hunter pulled the trigger. I wasn’t fast enough. The bullet hit my shoulder, throwing me back. I landed on the ground and slid several feet until my head hit something hard. Pain erupted in my skull and the edges of my vision darkened. I heard footsteps close by and growling of a wolf. No. I had to get up. Had to move.

Rolling to my side, I pushed myself up and stumbled to my feet. I only made it a few steps before collapsing to the ground. Then darkness pulled me into sleep.