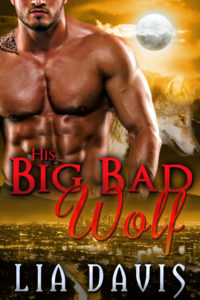 Get it at: Amazon

Handyman Shannon Foster is tired of having to move from place to place before others notice he isn’t normal. And for the first time since contracting the werewolf virus, he wants to settle down in one place—with one man in particular. Neal stirs up emotions like no other and raises a possessive need to protect within Shannon. Just when Shannon starts to believe he could make a life in the small town and seduce the handsome ranger, things turn south. Fast.

Forest ranger Neal Hartman can’t get his mind off the new hottie in town. However, when a large wolf attacks two boys and one of them is killed, Neal has to focus on hunting down the beast. The full moon brings even more strange happenings, and yet another attack, where his partner claims to have seen a werewolf. But that’s impossible, right?

Neal turns to Shannon for help to track down the rogue wolf, but working together stirs emotions neither of them expected, and a fiery passion that makes it impossible for them to stay away from each other. But is Neal ready to learn all of Shannon’s secrets?

Shannon stopped in his trek across the living room. He studied Neal with a raised brow. The rush from his earlier shift had his wolf on edge. Ron being in the area didn’t help. Then Shannon had run into Neal in the forest. His scent alone drove both the man and the beast wild.

Hence the cold shower moments before the ranger had showed up at his door. Aroused.

It was all Shannon could do to keep from dragging the other man to his bed. So for the moment, Shannon would plant his ass on the sofa and enjoy the view. “Would dinner be before or after the hunting party?”

A light shade of blush colored Neal’s cheeks as he stuck his hands into his jeans pockets and glanced around the room. “I…um…before, I guess.”

The corners of Shannon’s lips tugged into a smile. Damn, the man was hot. His short brown hair had streaks of golden blond, most likely a result of the ranger being outside all the time. Shannon didn’t think Neal wore a hat. At least, he hadn’t noticed him wearing one in the time Shannon had been in town.

When Neal lifted his grey eyes to lock gazes with him, something unfurled inside Shannon. Unable to stop himself, he rose to his feet and closed the distance between them.

The first time Shannon had seen Neal was the day he arrived in town. They’d met outside the realtor’s office where Shannon had gone to rent his house. Neal had worn his ranger shirt tucked into a black pair of jeans that fit perfectly, giving Shannon a great view of the man’s ass. Using the man’s employment as an icebreaker, Shannon had told him he used to be a ranger. Shannon left out the reason why he’d had to quit—he’d been bitten by a werewolf. An instant connection had formed, and Shannon’s wolf clawed at him, wanting out to meet the ranger. However, Shannon couldn’t let the beast out. Introducing the wolf to the man he wanted to pursue wasn’t an option. At least, not until he was sure Neal wouldn’t run or shoot him.

Shannon wanted to seduce the male, and thankfully, it appeared Neal had the same plan.

Stopping inches from Neal, Shannon cupped his head and kissed him.