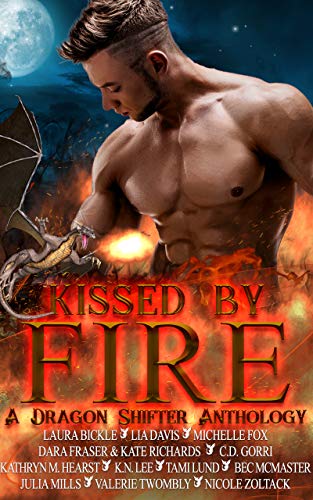 Coming to Amazon I Apple I Kobo I Nook November 2020

Twelve action-packed, dragon shifter romances that will leave you breathless.

Winter’s Last Reign: To become queen, Astrid must either enter a marriage of convenience or win the favor of the last dragon of Solveig. Astrid chooses the dragon, who demands that she complete a quest to conquer the landscape of her own heart.

War’s Passion: Gwen is sure that a fresh start can erase the horrors that haunt her. But just as her life begins to feel normal again, the dark and handsome Markus Sullivan turns everything upside down once more.

Dragon Burning Bright: Endre Felman has lived deep inside a mountain for centuries, adding to his hoard and looking for his mate. Meeting Adara gives him a glimmer of hope, but convincing her dragons are real, that he’s the dragon of her heart, and keeping her alive through her first shift proves to be more difficult than he ever imagined.

Mated To The Dragon King: Cora Tesouro gets handpicked by her boss to work one on one with an important overseas client. Determined to prove she is up for the challenge, she leaves immediately, but what is she to do when the Dragon King claims she’s his mate?

Dragonstruck: Rock-star Harte Lawson has fame, fortune, and swarms of female fans – he knows exactly how to satisfy. Life is good until he meets Eilís, a woman who has his dragon rolling over and begging for belly rubs. The problem is he can’t tell if she’s out to destroy his people, or worse…she’s his mate.

Half-Blood Dragon: Gifted with the power of prophetic dreams, Rowan is tasked with making the dragon empire’s crown prince fall for her. But when she’s blamed and convicted of murder, she finds herself in a race against time.

Dragon His Heels: Dragon leader Gabe enlists the aid of Talia, his trustworthy (and admittedly hot) PR manager, to help raise the daughter he didn’t know he had. Which is all fine and dandy until his dragon decides she’s their fated mate.

Heart of Fire: How to steal a dragon prince’s heart? Step one: Enter his lair. Rurik intends to claim the innocent Freyja as his mate, but with a dragon-hunter around he can barely afford the risk. Is she the key to reclaiming his heritage? Or will she be his downfall?

Dragon’s Lore: Legend as old as time… One woman created for one man. His perfect complement. Can they defeat his demons of the past, or will all be lost? Their Destiny lies within the Dragon’s Lore.

His Burning Desire: Connor loves being a firefighter, but his mate left him with only a note and the memory of her kiss. He can free her from the bond that was started long ago or fight for the woman he loves. With an arsonist on the loose, Jenna’s life is in danger, and their chance for happiness may come too late.

The Flames of Death: Humans are weak. Humans are prey. Humans are slaves. Or humans are dead. In a world where dragons rule the skies, the land, and the sea, humans struggle to survive.