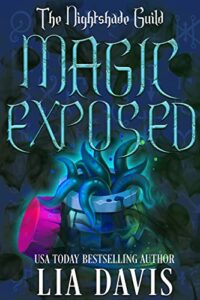 Coming In August to Amazon

The Nightshade Guild: Chapter Two – The year the magic disappeared

There is no rest for the Mages of the Nightshade Guild. As soon as they returned Princess Ameria to the Elven Kingdom their magic vanished. The Mage’s will have to go on a quest to restore their magic and stop the person who stole it from them.

The Mages of the Guild encourage you to read Chapter One which includes 13 books read in this order:
Mated to a Mage by Cassidy K. O’Connor
Mage you Blink by Gracen Miller
Mage you Look by Abigail Kade
Shadow Mage by Lia Davis
Mage Crafted by Cherron Riser
Mage of Misfortune by Lily Winter
Mage in Hell by Sheri Lyn
Sunny Mage by Jessica Ripley
Half-Blood Mage by Landra Graf
Sea Mage by Louisa Bacio
You Mage Me by Jennifer Wedmore
Midwinter Mage by Kerry Adrienne