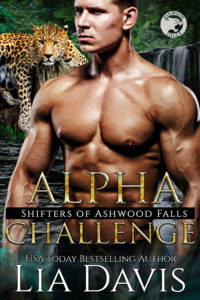 Words that describe a rogue, not a den mother.

Rhea Scott has crawled out of the darkness lingering in the deepest part of her soul. Keeping her grounded are her pack, the kids she protects and cares for, and a partner she keeps at a distance. Mating with Alec would be a fatal mistake—he’d crash and burn with her if the darkness ever won.

Nothing will stop Ashwood leopard Marshal, Alec Andrews, from claiming Rhea. The stubborn female thinks she’s protecting him by denying the mating pull, but she’s wrong. He’ll tear down the walls she’s built around her heart and show her they belong together.

The war is supposed to be over, but a new enemy has risen from the fallen Onyx Pack’s ashes. After children are kidnapped, Rhea’s wolf goes into maternal protection mode and she won’t rest until the kids are home safe. No one is going to stop her, especially that hotheaded, sexy, alpha male, Alec Andrews.

He caught Rhea’s lavender scent and he met her stare instantly. She was back in wolf form and beautiful. Her scent drove him crazy. When she caught up with him, she rubbed her body against his. He groaned and playfully nipped at her. She walked few feet in front of him then laid down in the grass. It was an invitation for him to come with her.

He stretched out beside her, loving the way his cat and her wolf connected. However, this was as close as she allowed him—casual touches and a stolen kiss when he caught her off guard.

He shifted back to human not caring that he didn’t have any clothes to change back into. He stared down at her and ran his hand through her silky copper fur. Words failed him when it came to telling her how he felt, what he feared. What secrets do you hide from the world, Mate?

After a few long moments of him stroking her fur, she shifted to human form and stared at him, her brows drawn. “You seem a little too serious today. What is it?”

He lifted one shoulder and lowered his head to claim her lips. The kiss was soft and quick. He didn’t dare deepen in it. After all, they were in a clearing with the kids nearby. “I can’t shake the feeling there’s something coming. That we are in a false sense of peace.”

Rhea nodded. “I feel it too. Addyson said Will had a vision while they were on a walk the other day. He picked up a rock and started shaking, saying mutants over and over. She said she’d never seen him so fearful.”

Rhea shivered as if the thought of mutants sent cold fear to her core. Alec moved closer to her, drawing her into a hug. His cat purred with satisfaction of having their mate in their arms. When she didn’t push him away, he sighed.

Addyson was his stepmother. Will was her adopted son, making the teen Alec’s brother. A tightness formed in Alec’s chest. He hadn’t taken the time to get to know the kid. In fact, he hadn’t really made an effort to welcome Addyson into the family.

Rhea touched his cheek, bringing his focus back on her beautiful blue eyes. She frowned. “What is it?”

She pressed her lips together as if she were holding in a smile. “It’s about time you admitted it. I wish I had a recorder.”

He sat up and gave her his back. “I’m serious. I haven’t gone to Dad’s house to visit with Addyson or get to know my new brother.”

Sitting up, Rhea leaned into his back and wrapped her arms around his chest. “We’ve all been busy with the rebuild of the den. Addyson and Will understand. They will be there when you’re ready.”

Alec covered her hands with his and leaned into Rhea a little more. She knew what to say to bring him out of his self-loathing. And she was right. His stepmother and adopted brother were Scribes, they knew why Alec distanced himself from others. They had the ability to see the past, present, and future by touching an object or person. Alec bet his dad had filled them in on details Keegan would know.

Their abilities were also why Will had a vision of mutants. That confirmed Alec’s suspicions that blood-thirsty creatures were still out there. “Where did Will have this vision?”

Rhea let go of him and shrugged. ”Addy didn’t say. Keegan stopped by and she quickly change the subject.” Rhea frowned. “I’m not sure why Addy hadn’t told him or why she would hide it from her mate.”

Alec wasn’t sure why his stepmother would keep something like Will’s vision from his father. Maybe she wasn’t really deliberately keeping it from him. Maybe she hadn’t had a chance to tell him. “The mutant could’ve been in the area before the Onyx den was destroyed.”

Rhea’s features seem to relax. “That could be true. We might all be worrying over nothing.”

“You don’t believe that any more than I do.” He raised his brows, challenging her to argue with him.

She poked him in the chest and then nipped at his nose. “Yeah but I like the sound of not living in fear.”

Something dark passed over her features and she averted her gaze. He touched her cheek drawing her attention back to him. “There will be a day when we are free from looking over our shoulders and fighting evil.”

She hardened her stare and frowned. “That might not be in our lifetime.”

Studying her, he tried to get a read on her emotions, but she threw up a wall between them. Before he could reply she shifted into her wolf. When he reached for her, she ran off, heading for the tree line where a few of the kids had wandered off to.

Releasing a sigh, Alec scanned the area. The field was almost a perfect circle surrounded by the forest and large enough the kids could run and play games without being on top of each other. His gaze flicked to where Rhea’s wolf disappeared as she reentered the field with a sulking pup named Charlie in her teeth.

He chuckled at the sight, imaging how she’d be with her own kids. Their kids.

Rhea sat Charlie down and nudged his backside with her nose and growled to let him know it’s not a good thing to leave the field on his own.

Moments later Ana and Kieran rushed into the opening from the other side of the field. Fear widened their gazes. “Get the kids and get back to the den,” she sent the order to Rhea.

Not hesitating, Rhea obeyed the command and howled to tell the kids it was time to go. Alec jumped up and yelled, “Everyone run to the den!”

On the heels of the command two mutants charged out of that forest. Kieran rushed forward, tackling one of them to the ground. The second one locked its sights on Rhea and every primal lethal part of Alec screamed.

Shifting into his leopard he ran toward Rhea and the kids she was redirecting. Brenna barreled passed him in a blur of motion just as two more mutants rushed into the field. Rhea shifted into her human form and grabbed two of the kids, both in their wolf forms, and ran.

Sammie’s whimper echoed in the air and Alec turned in time to see a mutant snatch her and a leopard cub and dematerialize. What the fuck? The mutant reappeared, empty handed. Alec charged at him. The fucker smirked at him and grabbed Brenna and two more kids and disappeared before he could reach them.

Fuckers could teleport. He roared and scanned the area. Luna and Hayden had joined the fight, each fighting a mutant in their human forms. The sobs of scared children gripped his heart as we watched several sentries guarding a group.

He snapped his attention to Ana as she pointed to the edge of the field where four kids huddled together as if frozen in place with fear. Fuck. He ran across the field and when he got within a few feet from them another mutant ported in, snatched the kids, and dematerialized.

“No!” Rhea screamed and rushed passed him, into the forest. He had no idea where she was going. He grabbed her by the waist and held her to him while she fought to be released.

Before he replied everything around them got quiet. She gripped his arms, sinking her nails into his skin and began to shake. He sensed her anger. It flowed around them like snake waiting to strike.

He hugged her trembling form and kissed her temple. “We’ll get them back.”

She nodded and then fell still. She twisted around to meet his gaze. Her blue irises lit up with power and determination. “You bet your ass we will.”