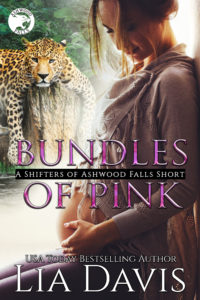 Available at  Amazon I Apple I Google I Kobo I Nook

Note: Bundles of Pink is a Shifters of Ashwood Falls short that takes place right before book ten starts.

Dani loves being the leopard Pack Healer of Ashwood Falls. It’s her birthright and duty to take care of her Pack in ways the Alphas can’t. Nothing could compare until her mate came into her life a little over a year ago. However, the scariest thing she has ever faced is being a mom. Nevan told her from the start he wanted kids and would be thrilled at the news. Dani isn’t sure she’s ready.

Goodreads reviews for Bundles of Pink

Cam stood in the middle of the community center and took in all the pink. She’d never been a girlie-girl and pink wasn’t one of her favorite colors. However, Shay—her best friend and sister-in-law—insisted the triplets needed pink in their lives.

Blaine came up behind her and slid his arms around her, his hands flattened on her very large and slight oval belly. “That’s a lot of pink.”

Cam nodded. “Yep. When they turn five, I’m starting them in the junior enforcer training.”

Blaine bit down on her shoulder, sending zap of hot, liquid desire through her. “No, you’re not.”

She leaned into him so his front pressed against her back and cupped his head. His Alpha power flowed in the mating link, wild and raw. She loved it. Loved him.

Cam’s heart danced as Graham’s words entered her mind. She met Graham’s heated gaze as he crossed the room. When he reached them, she grabbed his black T-shirt and pulled him in for a kiss. “Where were you?”

“Talking with Nevan. He’s a bundle of anxiety. The idea of possibly being a father and not knowing for sure is fucking with him big time.”  Graham placed his hand over Blaine’s, which were still on her belly.

Cam frowned. “I’ll talk with Dani when she gets here. We might go to the house for a private girl talk.”

Just then Cam sensed that her brother’s mate, Sable, entered the center. With a smile, Cam waved the female over. Blaine let out a soft growl and Cam slapped at his thigh because it was all she could reach at the moment. “Hush. She has proven herself as a loyal packmate.”

“I wasn’t growling at her. Well, not directly. She’s tense like she’s upset.”

Cam scented the air. Pregnancy screwed with her senses. It was one reason her mates didn’t want her working her enforcer duties while pregnant. She was too vulnerable. Sable wasn’t just upset, she was pissed. “Looks like Sable, Shay, and I are going to the house for that girl talk. I’ll text Dani on the way.”

Cam stepped out of Blaine’s embrace and kissed each of her mates before crossing the room to Sable.

The tension faded when Sable stopped in front of Cam. “Hi.”

“What’s up?” Cam wasn’t the type to beat around the bush about anything. Neither was Sable. So the female wasn’t going to brush off whatever upset her.

There was still some tension among the Pack members with Sable there. Some dickheads couldn’t accept she killed her own parents to save them all. No, that wasn’t good enough for some.

Cam pressed her lips together to hold in a laugh. She knew all too well what her alpha-male, growly brother was like.

Sable glared at her. “It’s not funny.” A small smile formed on her face. “He wouldn’t let me train with the Enforcers even though Dani cleared me to do so for a few more months. Nigel’s no better. Father and son are tag teaming against me.”

A laugh burst from Cam. “I’m not sorry. I was ordered den mother duties as soon as my mates found out. Believe me, I feel your pain.”