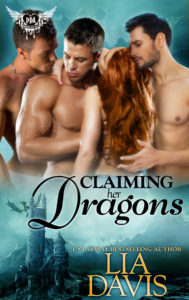 Be careful what you ask for…

The beautiful, curvy Jackie Olsen has a sex drive in hyperdrive. Her last boyfriend broke it off saying she was too exhausting for him. Without much hope for finding what she needs in the human gene pool, she turns to Gerri Wilder for help, hoping a shifter, or two could keep up with her desires.

Jackie just isn’t prepared to go on a date with not one, but three hot dragon shifters.

Goodreads reviews for Claiming Her Dragons

“I am done!” Jackie slammed the front door as she barged into the house she shared with best friend, Gracie. The pictures on the wall closest to the door rattled. Frustration was too mild a word for what she felt. Anger didn’t fit either. Needy, maybe. Hot and bothered, definitely.

Ugh. Why did men have to be so…man-like all the time?

With brows raised, Gracie glanced up from her magazine. Her brown eyes holding the all too familiar apologetic stare. “I take it things didn’t work out with…what was his name? Considering you’re home by ten.”

Ignoring Gracie’s last statement, Jackie dropped her keys in the antique, crystal dish next to the door. “Brad. And no. He said he needs a break. That I’m too much for him to handle right now. What the hell does that mean? Oh! He suggested I should hook up with a pack of shifters because they might be able to keep up with my sexual needs. Can you believe him? I thought guys like sex.” Ugh. She dropped onto the sofa next to her friend, with pursed lips and her leg bouncing in irritation. “I can’t help if I have needs.”

Gracie laughed so hard, she snorted, which brought a smile to Jackie’s lips. Elbowing her friend in the side, Jackie sobered and said, “I have a real problem.”

The need for sexual release was getting worse. It was like her body was trying to tell her something.

“Why not find a shifter or two?”

Looking at her friend, Jackie gaped. “How am I supposed to do that? I can’t go into a den unannounced and say, ‘Hey, I’m single and a sex addict.’”

Gracie snorted again. Jackie rolled her eyes and fought the onslaught of laughter. She really did have a problem. Her therapist said it was her brain’s way of making up for the loss of attention and love she got from her parents before they died. Jackie thought her shrink was full of shit. She’d always enjoyed sex. It just seemed she needed it more now.

It also soothed her anxiety. Odd, yes, but that was the only way she could explain it. If she went long periods without seeking a man’s touch, she became restless and needy. And moody.

Besides, it was a great way to expend energy and keep her mind off how boring her life was.

She had an okay job. Parents she could only talk to at a gravesite. Every guy she dated whined about how high maintenance she was. Maybe she did need to search the paranormal gene pool. But how?

“I overheard some ladies in the breakroom the other day talking about a dating agency for the paranormal.” Gracie got up and left the room.

Jackie stared after Gracie as she darted down the hall and disappeared into her room. A moment later, she came back with her laptop and sat beside Jackie. “It’s called Paranormal Dating Agency or PDA for short.”

Her fingers flew over the keys and brought up a website. Jackie frowned. Online dating? “I don’t think a dating site is good for me.”

“It’s not an online site. Yeah, there is a website, but that is just to provide the form for the match. From what I overheard, the agency has a large success rate. Like a hundred percent.” Gracie waggled her brows, then started typing away. “I think I’ll see what it’s all about. Hey! Maybe I can get a weekend in paradise with a shifter.”

Her excitement sparked Jackie’s own interest. What did she have to lose? Another failed date? “Give me the computer.”

Rolling her eyes at Gracie, Jackie pulled out her phone and brought up the site. It wasn’t the typical dating site. There were no ads littering the pages and it didn’t have that social meat-market feel most had. It wasn’t even a social site. No profile to create, just a form to fill out, like Gracie said. The homepage had a short welcome message with a few success story quotes. An About page with the company bio. The only other screen was a contact page with a short form.

Skeptical, Jackie completed the form, which consisted of name, email, phone number, type of shifter to be paired with, why you were looking for a match, and a bio section. Jackie quickly completed the form and closed the browser app.

After setting her phone on the coffee table, she sat back on the sofa. Gracie nudged her after closing her laptop. “So, what type of shifter did you pick.”

“I said to surprise me and I’d like three of whatever.” Jackie held in her smile as Gracie laughed out loud. It was a joke. Who would set her up with three shifters? She doubted there were three shifters out there looking for the same girl to date.

“Did you add that you are a sex addict?”

Jackie pressed her lips together. After a moment, she said, “Yes, because this whole thing is ridiculous.”