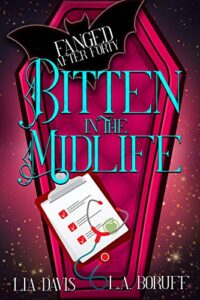 Jilted at the altar a month before her fortieth birthday. Poor Hailey. Midlife really does have a crisis. Or is it that midlife is the crisis? Either way, it sucks.

She’s never considered moving away, but it’s her best plan yet. Bonus – her bestie lives next door! However, her new neighbor is… weird, to say the least. Extremely hot, but odd. So are his friends. But Hailey will take strange neighbors over facing her lying, cheat, deadbeat ex-fiancé all day, any day.

Finding a job in a new town is more challenging than she realizes. With her savings depleted from the move, Hailey has to suck it up and take what she gets. After taking a job as a private nurse for an injured bounty hunter, things start to look up.

Then a skip falls into her lap. Okay, sure. She was being nosy and reading an incoming fax intended for her patient. But with a little encouragement, Hailey takes on the task of tracking down the skip.

Wrong. This skip is far more than Hailey bargained for. And her life is about to change in a very bloody and pointy kind of way. What a bite in the… Well, you know.

With the help of her witchy best friend and her new, very pale neighbor, Hailey is going to collect her bounty.

Goodreads reviews for Bitten in the Midlife

I was knee-deep in opened boxes and bubble wrap when the doorbell rang. “I’ll get it,” I called to Kendra in the kitchen.

Not waiting for her to answer, I swung the door open and froze.

The most exquisite man I’d ever seen stood in the doorway.

This guy was…tall. Well, taller than my five-one height, but then, most people were. He towered over me with a lean, more athletic than muscular form. His deep amber eyes reminded me of a sunset while his pale skin said he didn’t spend much time in the sun. Light hair, something in the blond to strawberry variety, brushed the tops of shoulders. Shiny, clean, and begging for my fingers to run through the strands.

Smiling as if he could read my mind, Strawberry Man handed me a basket strongly scented by blueberry muffins. The smell made my mouth water. Or was that him? Maybe he was Blueberry Man. Oh, geez. I hadn’t even said a word yet. Had I?

“These are for you.” He nodded toward the basket, looking a little uncomfortable.

Oh, yes, they were. His large hand brushed mine as I grabbed it, and I sucked in a short, quick breath. At some point, I’d become awkward. And ridiculous.

I remembered I hadn’t brushed my hair all day since the movers arrived. Damn.

The porch was smaller with him standing on it, somehow it had shrunk, and I couldn’t draw in a breath around him. Dramatic, yes, but so true. Or maybe he was too hot, and all the oxygen had evaporated in his presence. Either way, I found it hard to breathe and think.

“Th-th-thank you.” I was like a nervous teenager who’d just met her very first pretty boy. I chuckled, hiccupped, and would’ve fallen out the door if not for the frame I’d somehow managed to catch my shirt on.

He nodded and tilted his head, smiling. Damn if my knees didn’t go weak. “No problem. If you need anything at all, I’m Jax, and I live right over there.” He pointed to the house across the street. The back view of his head made my heart pitter-patter and my belly rumble as much as the front.

“You’re the….” I didn’t know if he, if they, were loud and proud with their creatures of the night status, and I didn’t want to take the chance of outing Kendra for telling me. Unfortunately, I thought of it a second after I started speaking. “Neighbor.”

His grin hit me like sunshine poking through the clouds on a rainy day. Ironic, since vampire meant allergic to the sun in a deathly kind of way.

I didn’t know if I should invite him in. What if there was a Mrs. Vampire? The last thing I needed was to become a jealous vampire wife’s main course.

Like the queen of the dorks, I held up the basket, gave it a sniff, then hiccupped again. “Thanks for the goodies.”

As I spoke, I wished again I’d taken a moment to brush my hair or put on a clean shirt before I answered the door. Vampire or not, this guy deserved a neighbor who combed her hair.