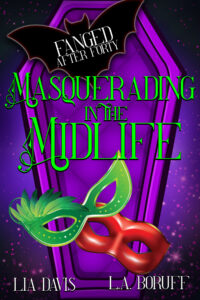 That’s only half of who Hailey Whitfield is. She’s also a bounty hunter and the true mate to the vampire master who made her. The latter is something she isn’t sure she is ready for. She’d previously sworn off marriage. Never again. A true mating bond, though, seems like so much more than a marriage!

She has two months to figure out the bonding thing and she plans to put a pin in it for now. A more important mission had come up. Her friend and fellow bounty hunter, Chloe, is missing, and it’s up to the Bond Girls to bring her home.

The case takes a dangerous turn that sends Hailey and her team undercover to get an invite to the largest masquerade ball on the east coast.

Is it wrong to be excited about the ball and scared for her friend at the same time? Probably. But Hailey is taking the world by storm, one case at a time.