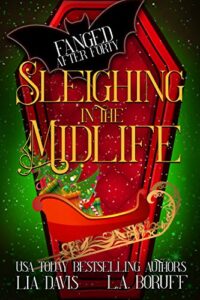 Luke Whitfield is getting pretty sick and dang tired of everyone thinking he can’t handle a few simple human skips.

Okay, yeah, he messed up a couple. And that one time an elderly lady got the drop on him, but everyone screws up in the beginning, right?

It’s time for Luke to branch out on his own and when Jordan sends a skip to the Bond Girls agency and nobody is there to take it, Luke decides he’s going to prove once and for all that he’s got what it takes.

Hello, Hollywood? Is this the setup for a new Christmas movie, or what?

Because this is Luke we’re talking about, nothing is going to be straightforward.

He grabs Ransom for some extra muscle and off they go to take down Ol’ Saint Nick.

Nicholas’s apartment is not what they expected. Especially when they walk into a closet and step out in Nar—err, The North Pole.

Luke’s got this in stride, though. Santa’s being blackmailed by his cousin Krampus? No problem. He’s a Bond Girl now. With Ransom by his side, he can figure out anything and take down anybody. Even evil elves.

Except for tights. He’s not wearing tights. Not again.

Goodreads reviews for Sleighing in the Midlife

“Dashing through the snow…” I sang as I spread the fronds on the fake tree I’d found in the attic. Christmas music played softly, setting the mood for holiday decor. I loved—in all caps—Christmas. It was my favorite holiday next to Halloween. “Goldie-girl, how’s your row going?”

She grinned up at me with her tongue sticking through the gap in her front teeth. She was a little old to lose her two front teeth, according to the interwebz. Ivy, the little cat shifter’s grandmother, and Ransom and my new roomy, said that shifters aged slower than humans. Even as children they seem to be behind on development compared to human kids. Ivy reassured me that Goldie was right on target with her growth.

As a shifter herself, Ivy would know more about it than I. So I trusted her when it came to making sure Goldie got what she needed, even though I was a little obsessive at times. And bless Ivy for being so patient with me.

Goldie bounced to the music and moved on to the next fake tree limb, spreading the branches horribly. But that was okay with me. I smiled and my heart swelled. It was great to see her in human form more often and acting like a normal eight-year-old. I truly think having Ivy here helped Goldie a lot.

When we first found her, she was in her orange and white, long-haired cat form and only shifted when she felt safe enough to do so.

She stole my heart from the moment I saw her.

So, yeah, this sweet girl was going to decorate this tree with me and I wasn’t changing a single poorly-spread-out branch. If she hung every ornament on one limb, then I’d tie this tree up so it wouldn’t tip and we’d look at all the ornaments on the one limb.

I switched my songs. “All I want for Christmas is my two front teeth—”

“Uncle Luke, did you make up that song about my teeth?” Goldie giggled and pushed at my leg. “I like having my gap. The tooth fairy left me twenty dollars per tooth!” She leaned in close to whisper, “It’s hidden in my room.”

Ransom said twenty dollars for a tooth was too much, but I didn’t care. I was going to spoil Goldie any way I saw fit. But that man of mine was just as bad when it came to Goldie. I saw him looking online last night at some small sheds that looked like life-size doll houses.

“Don’t you worry, my Goldie-girl.” I twirled her blond hair around my finger. “That old tooth fairy told me to make sure you have everything you want for Christmas. I’ve been on the phone with Santa.”

Her eyes got wide. “You talked to Santa?!”

“I sure did.” I nodded solemnly and moved to the next branch while watching her from the corner of my eye. “And do you know what he said?”

She shook her head, eyes wide and hopeful.

“He said that you were on the nice list.”

How could this sweet baby not know she would be on the nice list? It was a no-brainer. “Of course you are.” I tweaked her nose. “Now, help me with these ornaments.”

“Dashing through the snow…” I sang with the music and picked up a box of ornaments that had been with the tree in the attic.

“Luke.” Ransom’s deep voice held a tone of disapproval. Uh-oh. What did I do?

I whirled around and drank in the sight of him as I spread my arms wide. “Ransom.”

A hint of a smile twitched his lips and desire flashed in his blue eyes. “Why are you putting up the tree? Where did you get a tree?”

“It’s Hailey’s. If she wants it for Jaxon’s house, we’ll go find her another one.”

The big lug sighed and let his head hang back like I was really testing his patience. I was good at pushing his buttons, but usually, I did it on purpose. And he loved me anyway. “What?” I asked.

“It’s November first. Why are you decorating for Christmas?”

Ah. He was one of those. “Because it brings me joy, Marie Kondo style. Now join in or shut your trap, you grinch.”

Goldie giggled. “Ransom is too handsome to be the grinch.”

I snorted. She wasn’t wrong. “You got that right, honey. He could be a young Scrooge, though.”

With one hand on the bottom row of branches, she wrinkled her nose up at me. “Who is Scrooge?”

I scooped her up and twirled her around. “We are going to have to start watching Christmas movies tonight. We’ll start with Ebenezer Scrooge. Disney has a great version with Mickey Mouse that we can watch.”

Her eyes lit up, as I’d known they would. “I love Mickey Mouse!”

“Uncle Luke is going to turn you into a Disney character,” Ransom said as he took her from me. “Which would you like to be?”

She giggled and named off all of the princesses as they headed toward the kitchen.

“It’s dinner time, little princess,” Ransom said. They disappeared into the next room. I kept humming Christmas songs and fluffing out the tree, skipping over the parts Goldie had done.

A few minutes later, my phone rang. Ugh. It was Jordan Leslie again. He’d been calling two or three times a day since Hailey and Jax were out of town. How many cases did Bond Girls normally take? This was getting ridiculous. “Hey, Jordan. What can I do for you?”

“Any word on when your team will be back in town?” Boy, he sounded testy. More so than usual.

“Sorry, friend. They’re probably going to be gone for at least several more days.” We’d told him they were off on a family matter, but they were really off trying to take down an area leader who had gone rogue. It was an all hands on deck sort of situation, except for me and Ransom. He’d stayed behind to be Jax’s royal fill-in since he was Jax’s second in command, and I’d stayed because… Well, I hadn’t been invited to come along. Hailey had said I was needed to field calls for Bond Girls, but Cleo could’ve done that. In other words, she wanted me safe at home even though I was now a vampire and hard to kill.

“Unless it’s something simple that either Cleo or I could take, I’m afraid we’re still out of commission here at Bond girls.”

“I think you could handle this,” he said. “Some old dude robbed a bank in a Santa suit. He’s got a stupid Christmas name, ahh, let me see here. Nicholas Clauson.”

I couldn’t help but snort. That had to be a fake name, right? “No wonder he wore a Santa suit. It fits too well.”

“Yeah, but now he’s MIA. They snagged him right outside the bank. Idiot didn’t even get away with the money. I bailed him out and he’s gone, and with him, my bail money. I need you to find him and bring him in.”

I tapped my chin and considered my options. Kendra was off with Hailey and crew, so I couldn’t use a locator spell on him. I’d have to do it the old-fashioned way. “Does he have any military training?” I asked. “Gang affiliations? Really good at hunting?”

Jordan chuckled. “None known, no. He’s lived a quiet life. That’s why I was willing to bond him out. He’s got some story about his cousin blackmailing him for money.”

I plopped down on the couch and smiled at Ransom. He’d reentered the living room when I picked up the phone. “I guess Ransom and I can have a look. No promises, though. I may not be able to bring him in.”

He hung up and I gave Ransom my winningest smile. “Wanna go on a date with me?”

His eyes flattened. I knew he heard the whole conversation. “That’s no date. You want me to make sure you get the skip.”

“Yeah, but we’ll be together.” I stood and crossed the living room to him, flattening my hands over his broad chest. “Just you and me. That’s a date, as long as we’re enjoying spending time together.”

When his face softened, I knew I had him. “Okay, okay.” He took my hands in his, kissing my fingers. “Go say goodbye to Goldie and Ivy. I’ll get my weapons.”

After I kissed my girls goodbye, I grabbed the knife I’d taken to wearing in my boot. Yeah, I was a vampire, yeah I was supernaturally strong, but it never hurt to be prepared. Especially since I was going out with Ransom. The guy was too good at his job, and I didn’t want to look like a total fool.

“Ready?” he asked as I walked out to the car.

I nodded and hopped in.

“Where to first?” he asked.

“Jordan’s office, so we can pick up the file, then we’ll go to Santa’s apartment and snoop around.” I blew out a breath. “This is going to be a long night.” I hoped I wouldn’t screw this one up.

Ransom chuckled as he pulled away from the curb. “At least we’re together, right?”

With a chuckle, I stared at him and winked. “Got that right, sweetcheeks.”