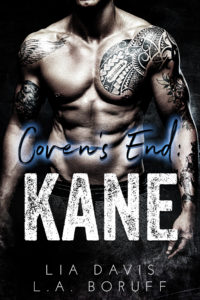 Those are just a few of the labels my people placed on me. Some say those are qualities of a good leader. Others disagree.

Heir to the vampire throne and Lilith’s only son, I am being forced to find a mate.

Not any female will do. Because no one compares to her.

She’s a lycan princess, off limits, and I’m not her only potential mate.

Gun fire echoed through the forest and the video feed. One by one, the lycans fell to their deaths. Wicked satisfaction flowed in her veins as she witnessed the attack from the small monitor set up to show her what she’d paid for. The lycans got what they deserved.

She’d expected the private group of human soldiers to be undisciplined and argumentative, but their training was impeccable. They moved almost as light as a vampire, making her curious if they’d worked with her kind before. Maybe they hunted vampires on the side.

Whether they did or not, she didn’t give a fuck. What mattered was their ask-no questions policy. Of course, the more money she paid, the less they wanted to know.

They only knew her as Commander, and she liked to keep it that way.  They didn’t need to know her true identity. Not yet, anyway.

Dressed in full tactical gear, she sat in the back of a black van parked in the woods adjacent to the lycan home, hidden from the neighbors. Two technical specialists sat on either side of her, but her focus was on the video feed.

Her body hummed with power and the need to join in on the attack and seek her revenge on the foul beasts who took her parents from her.

The screen split into four different feeds. With her vampire senses, she was able to watch all four simultaneously, not missing much action between the scenes. However, she focused on her general’s body cam. He glided through the downstairs with efficient, stealthy movements.

A female lycan rushed down the stairs, then launched herself at him, claws out and teeth bared. The general fired, hitting the woman with silver bullets—a lycan’s biggest vulnerability. The silver would slow the healing process down and make the beasts easier to kill.

The lycan screeched and fell to the ground. The general shot her in the head and twisted around to shoot the three males charging in through the front door.

Sitting back in her seat, she inhaled and wished she could smell the blood her soldiers were spilling. She couldn’t go into the house because the lycans were excellent trackers. Not that she was afraid of them. No, she didn’t want this attack to be linked to her. It was too soon to reveal herself. She was just getting started with her plan.

She watched the four screens as her team of humans swept the home, making sure there were no survivors. The sound of bullets being shot through silencers reached her sensitive ears, and she smiled.

The battle was over too quickly. The mangy mutts were asleep and caught off guard. Then again, that was the point. This operation wasn’t about her own satisfaction of watching the wolves get what they deserve, it was a warning.

Just like the one she planned to give the vampires not long after dawn broke, when they settled into their beds.

“It is done, Commander.” Her general’s cold voice came over the radio. She’d never met a human so devoid of emotion before. He was perfect for what she had planned.

“Dead. Everyone is dead.”

Maybe working with humans would pay off after all.