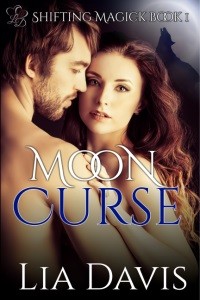 Sawyer Scott has been spelled to turn into a house cat once a month during the full moon. A humiliating predicament for an Alpha, and one that has kept him from his Pack every full moon for the last year as he searched for the witch responsible. In a last ditch effort to find the crazy old lady; he stumbles upon a scent he can’t deny. His mate.

Another Friday night with no flowers, no hot guy pampering her, and no friends to help her feel sorry for herself. Correction. No single friends to feel sorry with her. Of course, her non-single friends had asked her to come hang out with them. No, thanks. She wasn’t in the mood to watch the happy lovebirds enjoy each other’s company while she pretended not to notice.

It’d only add to the heavy weight on her heart and mood. It didn’t seem right to call her sisters, either. Ever since their grandmother had told them about the Kelly curse, they’d made it their mission to find out a way to break it. A task that had become too emotionally draining. She didn’t have the energy for it. The curse would be there tomorrow and the next day.

Each of their curses was different, but they all involved mating. Audrey, the middle sister, had to mate someone who’d been kissed by a god. Diana, the youngest, had to mate with her true half before midnight on her thirty-third birthday.

Olivia’s curse was to find a man who was a descendant of Artemis, goddess of the moon and the hunt. Olivia had no idea where was she supposed to find this demi-god. She’d already tried consulting a time traveler and got laughed at.

Whatever. She didn’t need a man. Living alone allowed her to do whatever the fuck she wanted. Besides, there weren’t many guys who liked a short, curvy woman over age thirty-five. No, they liked them thin and young. Not to mention, she came from a family of crazy witches.

Settling into the corner of the sofa with a glass of wine in one hand and the boxes of tissues within reach, she clicked the play button on the DVD remote. “Ahh, the joys of being a cursed, mateless witch. I’m so pathetic.”

About ten minutes into the movie, she heard scratching at her back door followed by a soft meow. Glancing around the room, she spotted Midnight, one of her two black cats, sleeping in the window near the front door. Sam was nowhere to be seen.

With a heavy sigh, she sat her glass on the end table, pushed pause and stood. “How the hell does that cat get out?”

She padded through the kitchen to the rear entrance. When she opened it, she frowned. It wasn’t Sam; it was an orange tabby. The poor thing looked hungry and cold.

When she scooped the cat up, it hissed and growled at her. “Now, that is uncalled for.”

As if her voice calmed the little beast, it stopped its verbal protesting and peered up at her with gorgeous gold eyes. A quick peek under its tail told her that the cat was a male. He slapped at her, and she tssked. “Behave. I had to check to see if I needed to lock you up separate from my boys, but since you’re not female, you should be fine.”

“Are you hungry?” She opened the cabinet and pulled out a can of cat food and a saucer.

After setting the cat on the floor at her feet, she opened the can and dumped the contents onto the plate. She then placed it on the floor in front of him, but he didn’t want it. Olivia shrugged. “That’s all I have, bud.”

Picky-ass cat. As she re-entered the living room, the phone rang. Now what?

Olivia rolled her eyes at her grandmother’s cheerful tone. “Where else would I be, Grams?”

There was a brief pause before her grandmother spoke again, making Olivia suspicious about what the crazy old witch had been up to. She loved Grams like a second mother and would do anything for the woman. However, Grams wasn’t all there at times. At the age of four hundred fifty years old, she was the oldest witch alive.

“I wanted to see if you needed company. There is a new spell I want to show you.”

Olivia rolled her eyes. Even through the phone she could tell Grams was lying. But why? “No, Grams. I was just about to go to bed. I had a long day at the shop.”

The shop was called Kelly’s Enchantments and was the family-owned magick and gift shop. It really had been a busy day, and every day that week, people had come in wanting either the recipe for a love spell or for Olivia or one of her sisters to make one for them. Each of the Kelly sisters refused, and each time, the customers would get annoyed. Some even got angry.

Humans just didn’t understand that the Universe had a sense of humor at times. Besides, it was very literal about granting blessings. It was never a good idea to simply ask for a man to love. Because the type of man that entered your life may or may not be the ideal one. No, specific details were needed to properly grant the heart’s desires.

“Ah, yes. The love spells. Just give them colored sugar water and send them on their way.” There was a hint of a smile behind Grams’ dry tone.

Shaking her head, Olivia held in a laugh. “Why did you call again, Grams?”

It wasn’t that Olivia didn’t like talking to her, but the older witch got distracted easily. If Olivia didn’t stir Grams back to the main subject, they’d be on the phone all night.

“Oh, yeah. I saw a wild beast run into your yard a few minutes ago. Do be careful about taking in strays.”

Olivia drew her brows together. What was she talking about? “No wild animals here. Besides, I have a protection spell on the house.”

“Good. Good. Just be careful. You never know what you allow into your home.” Grams paused for a brief moment, then continued. “I have to go feed the cats.”

There was a click, and the line went dead.

That was odd. Then again, it was Grams. Most of what she said or did never made sense.

After setting the phone on the end table, she clicked the play button on the remote and sank into the corner of the sofa a little more.

Not even two minutes later, a loud crash sounded from the kitchen. She jumped to her feet, causing the remote to fall to the floor, and turned in time to see a large, naked man standing in the archway between the living room and kitchen. Her heart hammered and panic rose, restricting some of her airflow. Yet she couldn’t tear her gaze from his perfectly sculpted body.

“How…how did you get in here?”

He didn’t speak, just bored those gorgeous gold eyes into her as he stepped forward. Her body shook and she darted to her right to grab her broom. Midnight hissed and fled out of the room.

Holding up the broom like a batter at home plate, she glared at the man. “Don’t come any closer.”

One side of his sensual lips lifted as he continued his slow prowl toward her. Her body warmed at the sight of his broad shoulders rolling with each step. Dropping her gaze, she flushed and snapped her attention back to his face. Good grief, he was huge, everywhere. She had a strange, naked man in her house pinning her with his gorgeous gold eyes and she was ogling him like a double fudge sundae. Damn, she was going insane.