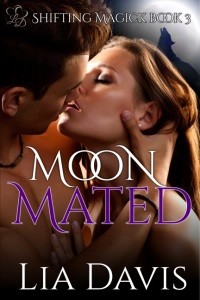 Terrence Miles is a lone wolf, loyal only to his Alpha. When he meets the youngest Kelly sister, he’s mesmerized by her beauty and soft curves. His wolf pushes him to claim her, but the man is hesitant. He’s never imagined himself mated. Could their mating break her curse and satisfy something in him he didn’t know was missing?

“What do you mean, you helped?” Dread sliced through Diana’s gut as she stared at her grandmother. Please don’t say you weaved a spell.

The elder witch had been banned from stirring potions and casting charms. One, her memory wasn’t what it used to be. Two, she, like all the rest of the Kelly witches, was cursed. Grams had never found her true mate to break the spell. Although she’d married and deeply loved Diana’s grandfather, the curse was never broken.

Grams’ curse had become a reality when Papa passed away a month after Diana’s mother was born. She’d never found anyone else to spend her long life with. As a result, Grams grew lonely and had gone a little…well, crazy.

“Grams,” Diana prompted, tapping her foot on the tile floor of her kitchen.

Grams rolled her eyes then opened the fridge. Her long, silver hair fell over her shoulder when she bent to open the veggie tray. “I just cast a small spell to help that stubborn wolf of yours see what’s in front of him.”

Oh, gods. Diana’s stomach soured. “Did you use those exact words?”

Grams stilled briefly before closing the fridge and facing her. “No, no. Silly girl. I used your name.”

Patience wasn’t something Diana had ever mastered. But getting angry with her grandmother, who usually didn’t make sense, wouldn’t make the situation any easier. The last spell Grams had cast was a love spell to “help” Olivia find her true mate. Technically, it did help, but the spell was wrong. Grams had turned the Alpha wolf of Gold Ridge into an orange house cat.

Fear gripped Diana’s heart at the thought of what kind of spell Grams had conjured up to aid in her search. Especially since Diana had indeed found her mate, or at least believed she had. Damn it.

“Grams, do you have the spell written down? Can you give it to me?”

Grams bobbed her head. “Of course, I wrote it down.”

Closing her eyes, Diana took deep, calming breaths while visions of a den full of wolves transforming into cats popped into her mind. “Do you have it on you?”

“No.” Grams closed the fridge then said, “You’re out of eggs.”

Seriously? “I’ll get them when I go to the store next week.”

“No, no, I’ll get them.” Grams pushed by her and left. A moment later, her car pealed out of the driveway.

“She doesn’t need to be driving, either,” Diana muttered and grabbed her cell.

Olivia picked up on the second ring. “Hi.”

“Hi. How are things there?”

Diana dropped her shoulders, thankful her sister couldn’t see her. “No reason. I was going to stop by in a little bit. You up for company?”

“That would be great. I’ll call Audrey, and we’ll make it a little party.” Olivia’s excited tone flowed from the other end of the call.

Smiling, Diana pushed away some of her panic. “Great. I’ll be there shortly.

Diana ended the call with a sigh. She needed to make a stop before going to her sister’s. The last thing she wanted to do was face Terrence, but she wouldn’t be able to relax thinking that Grams had done something to him.

Thanks, Grams. They should really look into a nursing home for senile old witches.