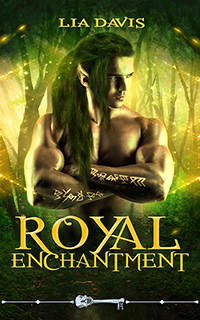 Ava Green has made a name for herself in the real estate world by reconditioning old, historical homes with her partner and friend Jeff. But her newest project, a three-story Victorian in the foothills of the Blue Ridge Mountains, promises to be her biggest moneymaker yet. And one she’s undertaking on her own. During her first walk-through of the house, however, she discovers a locked door, and a skeleton key that seems to appear out of nowhere. Unlocking the door, she is transported to a mystical world of fae and mythickal creatures and meets the King of the Morna. The sovereign of the Dark Elves.

King Finn Sylcan has searched for the one who can bring the magick back to his world, Edra, for eons. An old prophecy told of a female of both Dark and Light elven descent, a hybrid both Calim and Morna. It is said she is the only one who can repair the damage the war between the Dark and Light kingdoms caused. But after searching for so long, Finn never dreamed that she’d just show up outside his palace walls. Or that she’d be his mate.

Ava made it to the edge of the forest before Finn flashed in front of her. Skidding to a halt, she glared at him. Magick rippled around him, darkening his aura. A mix of anger and fear flowed from him and touched her awareness. He truly was afraid for her life.

She flicked her gaze to the large bodyguard behind Finn. Kellam stood with his arms folded like a wall. No, he was more like a dragon, waiting for danger to strike. Turning her attention back to Finn, she pointed at him. “I’m not marrying you. One, I don’t know you, and two, I will not marry anyone I’m not in love with.”

Finn closed the gap between them, took her hand, and then flattened her palm against his chest. Heat enveloped her, making it impossible to concentrate. His voice was calm and soft when he spoke. “I wouldn’t have it any other way. Please stay with me. Learn about my people, our people, and give me a chance to woo you.”

A tiny voice in her head screamed to run, but it was her heart that she trusted the most. Even when it led her down a darker path. Maybe she was here for a reason? However, she still wasn’t sold on Finn’s story of her parents being elves. “I’ll give you a day.”

A sexy smile lifted the corners of his lips. “That’s hardly fair. Give me a month.”

A month? Thoughts of home churned in her mind. She had no one waiting on her. In fact, she wasn’t sure there was anyone who would miss her. Really, she didn’t have anything to lose. Or gain. Sadness settled into her heart. Her life was a lonely, pathetic mess. “One week.”

He looped an arm around her waist and meshed their bodies together. Desire rushed through her, making her lightheaded. She took a deep breath to try to clear her thoughts, but his clean, earthy scent only made her want him more. Then he let out a low growl-like sound that vibrated his chest. “Two weeks.”

The sound of that one word made her suddenly think she had just sealed her fate with the devil himself.