Jun03 Comments Off on Royal Enchantment chapter one reveal part 2

Happy Friday! Are you ready for the second half of chapter 2?

Get the buy links HERE 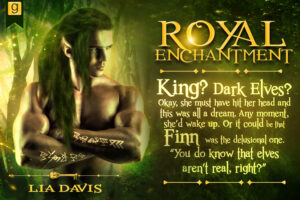 A howl like she’d never heard before cut through the trees in the distance, followed by shouts. Then the sound of horses’ hooves pounding the earth grew closer. Her heart jerked to life, beating rapidly as the howls and gallops got louder, nearer, moving in on her too fast.

Desperate to find a hiding spot or at least get out of whatever it was’s path, she darted to her right. She hurtled over fallen trees and barreled through the brush. But the howls and shouts still closed in. She cut left, only to realize she’d made a mistake. Thick, thorned bushes stood about six feet tall between two large oaks. Damn.

She turned to dart back the way she’d come, only to come nose to nose with a large, snarling animal that appeared half-sabretooth tiger and half-dragon. Large, purple wings stuck out of the beast’s back. Its snout was long and dragon-like, with fangs about as big as her hand from tip of middle finger to wrist.

She was trapped like a rabbit on a fox hunt. She just had to know what was behind that damn door.

“Charles. Heel.” The deep boom of a command came from behind the animal and sent a chill up Ava’s spine.

Charles backed off but only enough for the man to step into her line of sight. Ava’s heart skipped a few beats as she stared at him. Long, black hair that appeared green in the sunlight cascaded over his shoulders, framing a beautiful yet masculine face. Heat rolled within her abdomen, spreading to the rest of her body. Desire filled her mind, dizzying. The urge to touch him was strong, almost too strong for her to ignore.

What the fuck was wrong with her?

“Who are you?” The man loomed over her, arms folded, revealing the most unusual markings tattooed on his forearms. His words shocked her out of the haze.

Glaring at him, she mimicked his crossed-arm stance and asked her own question. “Where am I?”

He narrowed his gaze on her, but she swore there was a hint of a smile on his lips. Like he approved of her attempt to be brave. “Answer my question first.”

Even though it was a command, he spoke the words softer than his previous ones. Still, it wouldn’t hurt him to say ‘please.’ She released a sigh and figured she’d play nice. After all, she had a feeling she was in his world now. “Ava Green. I unlocked a door with a glass skeleton key and ended up here.”

He raised a brow and studied her for a moment. “You are from the human realm?”

Umm, yeah, the last time she checked… “And you’re not?”

One corner of his mouth twitched. He relaxed his stance and gripped her wrist. “Come with me.”

“Where?” Her heart pounded while her mind screamed that she was going to die.

“My home, where I can keep you safe from my enemies.”

What the hell did that mean? She planted her feet in place and jerked her arm free, which was easier than she’d expected. “I don’t know who you are, and I’m not going anywhere with you.”

He stared at her as if he weren’t used to being told no. A mix of shock and annoyance became etched onto his face. After a few moments, he reached for her again, but she darted out of the way. He muttered something that wasn’t English before saying, “I am Finn, King of the Morna, the Dark Elves.”

King? Dark Elves? Okay, she must have hit her head and this was all a dream. Any moment, she’d wake up. Or it could be that Finn was the delusional one. “You do know that elves aren’t real, right?”

His brows dipped as he stepped closer to her and waved a hand in front of her face. “Forgive me.”

Before she had a chance to question him, everything around her grew dim. Her body went limp in Finn’s arms. “What…?”

Sleep sounded wonderful. She closed her eyes and snuggled into his chest as he scooped her up.