Happy Release Day to Ava and her extended family. 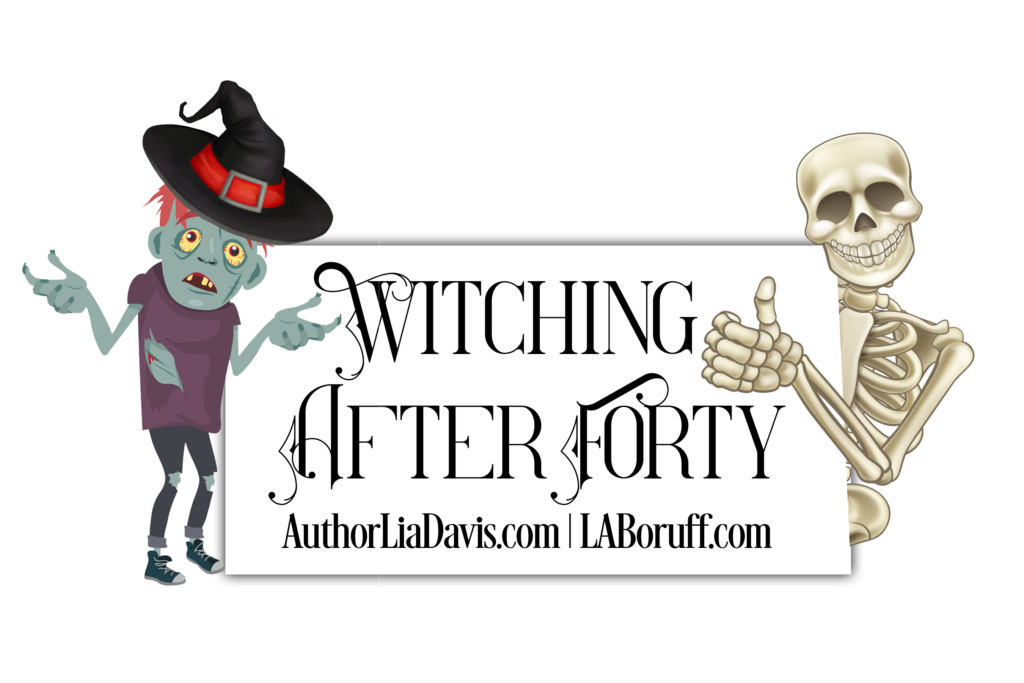 LA and I are celebrating with an awesome giveaway: A Witching After Forty Swag Box packed with books and goodies. KEEP READING FOR DETAIL ON HOW TO ENTER!

First we want to give you a Haunting sneak peek.

I set the mug back on my desk and ran my hand through my hair. It got stuck halfway down to my shoulder. What the hell did I have in my hair? Something sticky. Ew. Must have been that late-night… or was it an early morning snack? Leftover donuts from this morning. Or yesterday morning. Olivia had dropped them by at some point.

Seven heads turned toward me, staring like I had grown an extra set of arms. Owen, my friend, roommate, and mentor raised his black eyebrows and pushed his dark hair out of his face. Sam and Olivia, my childhood best friend and his wife, who was my current best friend and had taken the central role as my Person with a capital P, grinned as Olivia eyed my hair. Just to be sure, I checked. Nope, no extra arms. But my hair was a mess—half up in a sloppy bun and half down around my face. The latter had the sticky donut yuck in it.

Zoey, my sort-of adopted daughter, snorted and turned back to her pancakes while Wallie, my biological son, barely spared me a glance as he ate. He was long used to my crazy appearance after emerging from my cave.

“Is Sammie out of school?” I asked as I tugged down my oversized tee and pulled up my leggings. Comfy clothes were staples for a writing binge. Again, I wondered how long I’d been in the writing cave.

Olivia burst out laughing while Sam asked, “Did you sleep last night?”

Alfred came over and took my cup and the trash can from me. He glared at me and grunted. Then he pointed to the stairs. I didn’t need a translator to know what he meant. I needed a shower. Probably pretty badly.

Owen frowned at me. “You need to hurry, or you’ll be late for your flight.”

“What? What time is it?” I glanced at the clock on the stove and cursed low enough I hoped little Sammie didn’t hear me. That kid was like a parrot. He repeated everything he heard.

“Seven o’clock,” Olivia said with a snicker. She loved being right, and I hated that she often was.

I ignored her amusement. No doubt I’d hear about this moment later on. But reality was starting to come back to me. I had two hours to shower, dress, and pack. It was a good thing I’d created Zoey’s fake ID the night before. Luci—the devil, not the cat—helped me with a little magic that made her legit in the human databases.

Zoey had been an orphaned shifter who I’d taken in when my friends and I had saved her and a bunch of other kids from a shifter fighting ring. Sort of like dog fighting, but with poor shifter kids. Many of them had been very, very young and we’d found a lot of dead kids. Too many.

I jumped and scurried toward the stairs. “Right, yes. Go.”

Zoey, Wallie, and I were flying to Philly. The plan was to rent a truck there after we packed up the house and drive it back to Shipton. It wasn’t going to be an easy week, getting all of the stuff from my life with Clay packed up or donated. But it was time. It was past time. I had to move on.

After I showered and dressed, I stared down at my half-packed suitcase and tried to remember that I had a house full of my own belongings. I had a bigger wardrobe there than here. I didn’t need to take much. A knock sounded on my bedroom door. “Come in.”

Owen opened the door but didn’t enter. He was a little old-fashioned like that. Polite. “Are you taking Larry with you?”

“I asked and he said he wanted to stay here to help you.” I placed my toiletries into the small carry-on. I wasn’t checking any luggage, and I’d told the kids to do the same. Zoey would fit into some of my older, skinny clothes I’d hung onto in the hopes of losing weight. As if. If she didn’t like them, I’d donate them.

Out with the old. It was time to move on from more than just grieving my Clay. I picked up the mini suitcase and turned toward Owen. “Listen, if the house starts his crap, have Alfred grunt at him.” I wasn’t sure that would work, but it was worth a try. “Winston usually listens to him.” Since my old house had taken on a personality, we’d had to name him. Winston was as good a name as any. He seemed to like it, anyway.

Owen laughed. “Winston doesn’t bother with me because I’m a necromancer. I think he gave Olivia crap because she’s human. No magic.”

Hmm. I hadn’t thought about that. “Sam is human.”

Owen hummed. “True, but Sam also grew up with you and has spent a lot of time in this house.”

That made sense. He’d been in and out so much he’d learned long ago about my family and me being witches. “Are you going to be okay here for a week? You’ll have to go get groceries or at least be here for delivery. Alfred knows not to answer the door.”

“Ava, I’ve been a necromancer longer than you and know how to take care of a ghoul, a magical house, and an animated, fleshed-out skeleton who has been dead for thirty-some-odd years.” Larry had been a big surprise. When my fat, old, immortal Maine Coon cat, Mr. Snoozerton, led me to a little white dead kitty and asked me to animate her. I figured out I had the power to do more than animate. I could heal the dead. Something as yet unheard of, or only heard in rumor. I’d given it a shot on Larry, a skeleton I’d accidentally animated over the winter.

And he’d grown his flesh back. All of it. To the point that now he looked perfectly human. Alive. And according to Zoey, ‘freaking hot.’ “And don’t forget two immortal cats. One of which can talk quite well.” I frowned. “Maybe I’ll call Wade and just have him pack up the house.” Leaving this chaotic menagerie to Owen suddenly seemed insane.

Owen broke his unspoken rule of not entering my room and crossed over to me. “Ava. Stop.” He took my hands, forcing me to look at him. “You are going. Everything here will be fine. Not to mention, Sam will be here if I need anything, and the coven said they’ll help if anything weird happens.”

I snorted. The coven—my coven because I was the High Witch in charge—loved all the weird stuff that happened in my life. They’d probably be all over it with glee. Not that I blamed them. The insanity that was my life was, most of the time, pretty damn cool.

Owen let go of my hands and moved to the door. “You’ve put this off long enough. It’s time to let go.” His words reflected my earlier thoughts almost exactly. That had to mean something. And he was right. I could do this, but boy did I need a nap. And I didn’t think I’d be getting one any time soon.

Grab your copy of A Haunting Midlife to find out was happens next.

Get it from Amazon

Read it free with Kindle Unlimited.

LA and I are giving away one Witching After Forty swag box and five $5 Amazon gift cards. 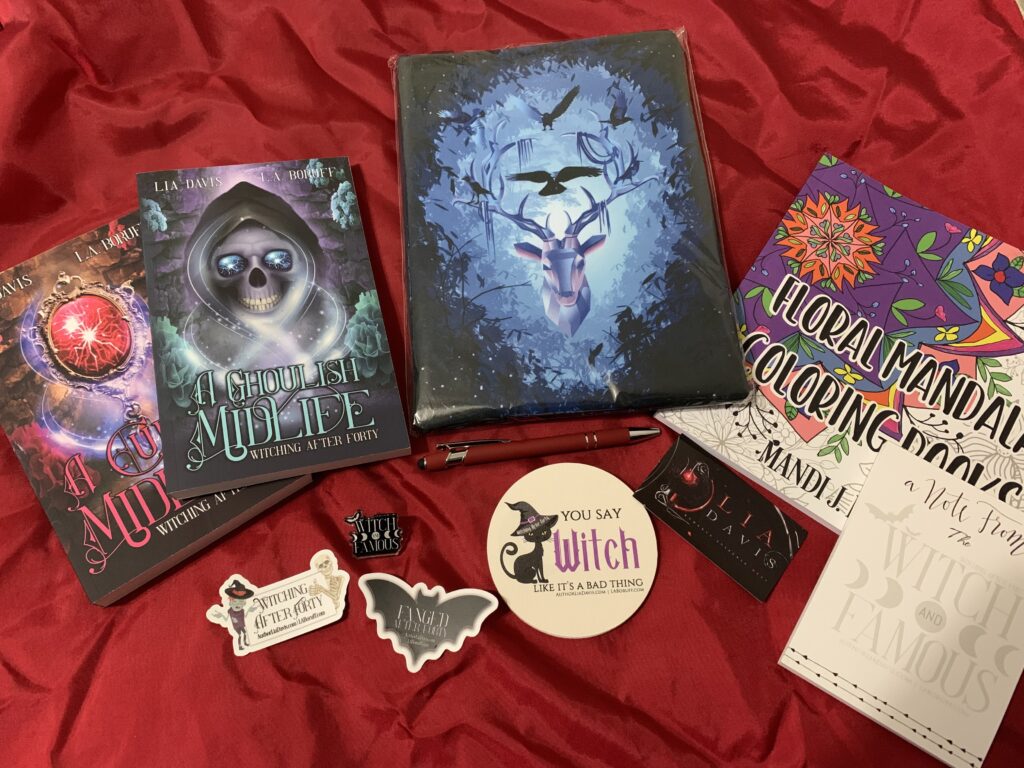 Witching After Forty coasters and stickers

Signed paperback copies of A Ghoulish Midlife and A Cursed Midlife