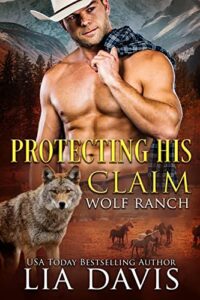 When wolf shifter Carson Kelmount first lays eyes on Grace Watson, he knows she is his fated mate. There is an instant connection between them that is undeniable and hard to fight. He wants nothing more than to keep Grace safe. But she is guarded and stubbornly refuses his help.

Though Grace tries to fight the mating urge, she can’t help but be drawn to Carson. He seems to be everything she’s ever wanted in a mate. A cowboy with a heart of gold with an alpha wolf inside him.

However, Grace has a secret. She can’t stay in one place for more than a few weeks before she has to leave again. It’s become a way of life for her. Always looking over her shoulder, never knowing who to trust. But Carson makes her question everything she thought she knew about survival.

Time is running out. And she needs to find a way to come up with the money to pay her mom’s debt–fast.

Can Carson convince Grace to let him in? And will they be able to overcome the challenges that stand in their way?

Goodreads reviews for Protecting His Claim

The early afternoon sun beamed down, shooting hot rays into Carson Kelmount’s blue eyes. He squinted them against the glare, and wished once again that he’d remembered to grab his shades before leaving the house that morning.

His brother, Logan, held the fence post while Carson filled in the hole with dirt. After making sure the post was secure, they moved on to the next.

“We should’ve waited until Sawyer was back,” Logan said, wiping his arm across his brow. “Made him do some of the work.”

Carson grunted and took a long drink from his water bottle. “While I’m inclined to agree with you, I’d just as soon get this done. Once the fence is up, we can maybe cut back on the number of enforcers we have on patrol at a given time.”

“Yeah, I guess. Have the vultures been giving us any more trouble? I mean, something I don’t know about?”

Carson shook his head. “No. But Sawyer told me before he and Erika left on their honeymoon that he wanted the fence put up. He didn’t give a date on that or anything, but I figured it’d be one more wedding present for him. One less thing to worry about when they get back from Greece.”

Logan wiggled his dark eyebrows. “Imagine our Alpha flying off to Greece for a honeymoon. Fancy. Imagine you being acting Alpha while Sawyer is off being fancy.” He bumped his brother’s shoulder with his. “And not letting the power go to your head. I’m impressed, bro.”

Carson growled low in his throat, a playful sort of sound. “Don’t worry, baby brother. I’ll find something to beat your ass over.”

Logan snorted. “Right. Keep thinking that. Hey, Frank!” he yelled, getting the attention of a ranch hand. “Pretend Alpha Carson is hinting that he wants a wrestling match later. Think we should get a betting pool started on who kicks who’s ass?”

There was a round of good-natured laughter and shouted insults between the men working. Carson grinned and put his back into making sure the fence posts were secure. A strong fence was the first line of defense. He and Logan worked in easy, companionable silence for a few minutes before Logan’s quiet muttering of his name caused Carson to turn slightly toward him.

“Tree line to your right,” Logan continued in a low voice. “Lots of little birdies.”

Carson nochanlanthy turned and saw what Logan was referring to. Five vultures sat in the trees, staring intently in their direction. Coal-black feathers gleamed in the sun, and dark-brown eyes rested on the members of the Kelmount pack working on the fence.

“Easy,” Carson murmured. “Looking isn’t against the law.” He jabbed the shovel into the dirt and propped a booted foot between the blade and handle and spoke loud enough for his voice to carry. “Ma said she had a hankering for chicken and dumplings. I wonder if she’d substitute the chicken for crow. Or do you think the meat would be too tough and stringy?”

There was instant cawing and hissing from the trees. Carson and Logan exchanged a grin while the ranch hands chuckled outright.

“Nah. Crackers are for parrots. We need something shiny they can play with so they’ll forget to be butt hurt.”

More laughter rang out, but Carson straightened and scanned the tree line again. Something told him there were human watchers in the woods. Sure enough, not a minute later, Lothain Hartwell and his son, Rody, came strolling out of the pine thicket.

Carson flicked his eyes to his suddenly grumbling pack mates then jerked his head at Logan. Logan nodded and eased away to gather the men in case of attack. Carson watched as the vultures’ flock leader inclined his head in a questioning manner.

With a single, short nod, Carson gave him permission to step over the invisible boundary line separating the two properties. Rody followed his father, but stayed a few steps behind him as Lothian made his way to where Carson stood.

“Good afternoon, Carson. I’d like to speak with you in private.” Lothian’s voice was smooth and pleasant, his tone polite.

While it grated on his nerves to have the vulture Alpha on his property, Carson knew he needed to be polite and civil as long as he could be. “Yes, of course. Let’s walk this way.” He headed off away from the crowd and Lothian followed after giving his son the stay signal.

“I’m sorry to intrude on you while you’re doing such hard work,” Lothian began as soon as they were several feet away. “But I have some information for you, and I thought it was best to tell you as quickly as possible.”

Carson gave him a long look. “What kind of information? Is something wrong?”

“That’s what I’m not sure of. We were at Shady’s a couple of nights ago, me and some others, and there’s a new waitress there. A pretty, little thing, very good at her job and friendly.”

“And?” Carson replied impatiently. “I know you didn’t come over here to wax poetic about a pretty waitress.”

A small smile touched Lothian’s lips, and was just as quickly gone. “No, indeed. I came over here to tell you the pretty waitress is a wolf shifter, and not part of the Kelmount pack. Yes.” He nodded. “I thought that might get your attention.”

Carson rolled his shoulders. “We’re the only pack in the area. The only formal pack,” he amended. “Is she a lone wolf?”

“That I can’t tell you. I know her name is Grace. She’s around five-four with brown hair and eyes. Friendly, competent, and in trouble.”

Carson narrowed his eyes. “What makes you say she’s in trouble?”

Lothian shrugged. “The way her eyes darted to the door whenever it opened, the way she’d glance around now and then. And it’s partly because, as a shifter, it’s easier to pick up on emotions.”

Carson nodded. He understood that. “All right. Now my question is why are you telling me?”

“She’s alone here, and in trouble. I thought that, as acting Alpha, you may want to speak with her, see if the pack can offer help.”

Carson cleared his throat. “I see. While I appreciate the information, Lothian, it’s not my job or the pack’s job to take in strays that pass through Jordan.”

“What was that about?” Logan wondered.

“Later,” Carson replied. “Let’s get back to work.”