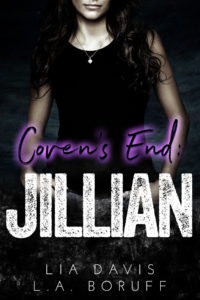 I’m not your typical princess. Don’t expect me to rule from afar, but I’ve only just met my mates. I’d like some time to spend with them before taking on the rule of every Lycan on Earth.

My vampire offers me an escape from the rules. He’s my forbidden pleasure.

My broken sentry keeps me grounded and reminds me not to take anything for granted.
My best friend, by my side since I was born, protects me and reminds me of the rewards of leadership and pack family.
But nothing, not even my mates, prepared me for our final fight.
The Vampire Council doesn’t approve of our nontraditional relationship. They’ll stop at nothing to prevent the merge of the Vampire Coven and the Lycan Pack.
The Lycan Council resists my every move.
Is love enough to end this war?

Quin nearly fell over as I shoved my shoulder into his arm. How dare he say that the pack would expect babies? I scanned the crowd in the pack hall before my gaze landed on Dad. Why did he have to mention grandbabies? Ugh. We were there to announce my ascension and his pending retirement. Dad would still be a huge support unit for me and my mates until Trinity and Emerson were taken out.

I nudged Quin again and kept my voice low so only Quin heard me. “I’m not getting pregnant right now.”

I rolled my eyes and gave my attention back to Kane and my father. Dad continued his speech. “The council will be governed by Kane and Voss, with the full support of your new High Alpha, my daughter Jillian.”

Smiling, I stepped beside him. The crowd was mixed, most of the lycans cheering me. Most of the vampires were complacent or scowling. Maybe it would take more work than I thought.

“Thank you,” I said loudly, projecting my voice. “We’ll have growing pains, of course.”

I stepped closer to Kane as my father slid out of the limelight and returned to his seat beside Sissy. “Not everyone will be on board. But one thing you need to realize is that we are not asking everyone to do what Kane and I are doing. Lycans, nobody’s asking you to mate with a vampire.” I smiled and kept my tone teasing, and many in the crowd chuckled. “We just ask that in an age where humans are entering the picture, we work together instead of warring against each other.” Many heads nodded, many shook. Ugh. “The lycans will still be lycans. We won’t be giving up our heritage, our traditions.”

Kane took my hand, and twined our fingers together. “And the same for the vampires. Nobody will be asking you to change. Just work together to keep our species secret and safe. Progress is necessary. We must say goodbye to the time of the Coven and the time of the Pack.”

We’d planned this part. Quin joined me on my other side, taking my hand, and Voss, the taller of the two, stood behind us with his arm on my shoulder as I delivered the last line. “We welcome the time of the Collective.”

The room erupted again, and we left them to their cheers and grumbles. They needed time to vent their emotions. We’d counted on it, which was why the we had guards from both races positioned around the room.

We turned, and Dad and Sissy stood. Dad shook my mates’ hands and Sissy hugged me. “I’ve always thought of you as my own. Now it’ll be official.”

If there was anyone alive I could get behind being with my dad, it was Sissy. I hugged her tight. “Love you, Sis.”

“Love you back.” I had to fight tears. She was as close to a mom as I had. She was exactly what my father needed.

The crowd calmed, so we stepped forward again. Kane delivered our next piece of news. “There was a home attacked by the Red Night. The family of the coven members killed in the home want nothing to do with the location and offered it to us. We’ve had a shaman come in to cleanse the site, and he assures us all spirits have moved on and are at peace and all emotional imprints are cleared out so Jillian can’t pick up on the events that happened in the home. Although, none of us will never forget. Anyway, the house is large, secure, and perfect to be our home base. There are other buildings on the property where we can host traveling Collective members, have room for training facilities, and there’s plenty of room to expand and build on.”

Many nods answered him. I stepped forward, standing shoulder to shoulder with Kane. “We will use security from the current enforcers from both the coven and pack, creating a Collective Police Force.”

The fighters of both sides would have the hardest time accepting that they would have work side by side with their enemies. That was something they would need to suck up and deal with, or they could leave. I wasn’t going to put up with any of the enforcers disrespecting one another.

There were a few grumbles, but it went over fairly well. And by fairly well, I meant no one looked like they wanted to kill someone.

“I know you have questions. I ask that you give us time to deal with Trinity and Emerson before everything becomes official.” Kane smiled at the crowd. He was enigmatic, even some of the unhappy-looking lycans seemed to soften toward him as he spoke. “Hold your questions. Write them down. We will reconvene in a week. Everyone have a nice evening.”

We’d held the meeting an hour after nightfall to give both groups the opportunity to attend, and we’d been pleased with the turnout.

“Well, now our work begins.” I scrubbed my hands across my face. Finding Trinity and Emerson, moving to a new house, including all our trainees, was a huge undertaking. Lifting my gaze, I met my dad’s stare. “Dad, you’re not going anywhere yet, or stepping down.”

He gave a short nod. “I hadn’t planned on going anywhere until after the traitors are dealt with. The transition of power is important to start now while there is a threat on both races. It gives our people hope and it shows them we’re handling it.”

Dad and Sissy moved to the entrance of the Pack Hall and my guys and me followed. I had a hunch about the reasons Dad suddenly decided to step down. “Yeah, it’s not only a transition of High Alpha but a change from the old ways to new traditions.”

Dad nodded. “I thought we’d do the official ceremony once you’ve moved. For all decisions, you’re in charge, but I would still be the High Alpha in hierarchy until then. It’s a sensitive time, and you’ll want a few days to just absorb your new powers and abilities.”

“Is it really going to be that drastic?” Kane asked, glancing at me with his brow drawn.

“Son, it’s unlike anything you could imagine. You’ve been at your full power all your life. Jillian grew and trained into what she has now. But what she’ll get is stronger than any one vampire, especially for the first couple of decades. It wanes slightly as we age, but not much. I’ve let myself grow fat and complacent!” He patted his washboard stomach and laughed. Sure, he might’ve slacked off the daily training regimen, but I’d still put my bets on him in any fight.

“Is it painful?” Pain didn’t scare me. If it was painful, I’d embrace it and work through it.

“Not physically. The emotional and mental drain is almost too much, though.” He laughed. “I hope to be around when you go through it, actually. It’s pretty funny to watch.”

“Dad!” I slapped his arm. “You’ll be laughing at my turmoil.”

He laughed harder and rubbed his arm. “I sure will. My parents laughed at mine, knowing it was temporary, and worth it once I discovered how much I’d love the feeling of being the High Alpha. And I’ll do the same to you, as you will to your child one day.”

“One day far into the future,” I muttered to myself. Unfortunately, everyone in the room had exceptional hearing.

Quin gave us both scrutinizing looks, and Kane laughed. I supposed we’d have to have a real conversation about it at some point. But not today. Definitely not today.