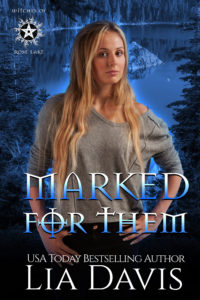 Hiding out in a mental institution isn’t glamorous. But I call it surviving.

I’m blissfully unaware of the world outside thanks to the hospital’s walls—and spell—that hide me. Until a ghost shows up, talking about his friends being marked by a demon. But not just any demon. The same one who marked me and wants me dead.

Fearful that Daddy Dearest could be my next uninvited guess, I choose to follow the ghost to his four very alive friends. To my relief, they want Salrus dead just as much as I do. What I’m not prepared for is finding out that Zane—the alpha wolf shifter—is my mate, and the demon mark links the six of us—ghost included—together on a deeper level than I ever imagined.

Teaming up and preparing to face the demon stirs up passion and dark secrets none of us are really ready to face.

Goodreads reviews for Marked For Them

I was stuck in the same dream that had haunted me since I was ten.

The demon appeared in my bedroom, lip curled and his crimson gaze locked on me. Dark, heavy magic flowed around him, reaching out to me. When I screamed for Mom, the demon threw his hand out. My scream was cut off, and the bedroom door locked on its own.

A moment later, my right hip burned as if it were touched by hot metal or fire. Then the demon vanished.

Gasping, I sat up in bed and fought to breathe. I shouldn’t have gone off my meds. As soon as the haze of la la land lifted, the dreams returned and the spirits showed. Like the one pacing my room at the Happy Rose Mental Health Hospital.

I ignored him, hoping he’d just go away. They usually did after a while.

He started muttering to himself. Great, a crazy one. Well, I was in a loony bin. Just go away already.

After another five minutes of listening to him debating whether or not to come back later, I released a heavy sigh and faced him.

That got his attention.

I studied him and fought the urge to flinch. One would think I’d be used to seeing the dead after my twenty years of living. Being born a hedge witch gave me the ability to see and communicate with the dead. They knew it, too. Always coming to me to give loved ones messages, and on occasion, wanting me to solve their murder.

However, I couldn’t shut off my empathy for those who died violently. This one appeared as if he’d been in a car accident by the large gash on his forehead and the seatbelt marks on his neck. Or at least I hoped those were seatbelt burns. He couldn’t be more than seventeen. Poor kid.

He stared back at me, his mouth opening and closing. Finally, he hardened his gaze and said, “I need your help.”

He drew his brows together, and his mouth dipped into a frown. Oh, hell. Sitting up in the hard-ass twin bed, I settled my bare feet on the cold floor and winced. “Look, kid, if you haven’t noticed, I’m in a mental hospital and can’t help you.”

“You can help me if you break out.”

“And why would I want to do that?”

He glanced down at my arm and stared at the scar that ran from my wrist to disappear under the sleeve of my nightgown. What he couldn’t see was that the old wound ended at my collarbone. A jagged, thick line left by a demon who thought I owed him something.

I’d been eighteen when he gave me that reminder. The bastard tried to kill me. Which was odd since he marked me at the age of ten—the first time he found me.

Annoyed, I grabbed my long-sleeve robe from the post at the foot of the bed. The hospital staff found my scar disturbing, even though they never said anything. Their facial expressions and the pity that rolled off them each time one of them noticed it was hard to ignore. So, I wore a thin, long-sleeve robe on the few days I left my room.

“Why haven’t you crossed over yet?” I studied him. He was more bothered by me covering my arm than the scar itself. Interesting.

“You were marked by the demon.”

Dread sank deep into my gut.  I looked down at myself. My nightshirt rode up, exposing my panties and the circular demon mark. He’d seen a demon mark before? “Did a demon cause your accident?”

The real question that I couldn’t bring myself to ask was: Did the demon kill you?

A single nod soured my stomach. “They’ve been searching for you.”