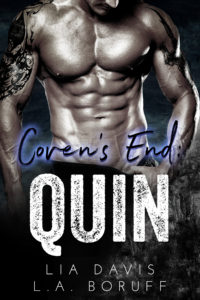 I never intended to mate. I definitely never imagined I’d share her with two other alpha males.

When the Lycan Princess came of age, the mating call hit me. Hard. She’s mine. My wolf will do anything for her. Even sharing her with an arrogant vampire and a hot-headed wolf.
When an outside threat surfaces, it’s up to me, Kane, and Voss to protect our mate. We have to find a way to set aside our differences and become the partners she deserves.
If we fail to form a solid bond, both the Lycan and Vampire races are doomed.

I cradled Jillian to me as I carried her out of the vampires’ massive home. Voss held the door open for us, his features a mask of anger and worry. She’d passed out from the exertion of reliving the murders, but not before revealing who was leading the humans on this vendetta.

Trinity. The current vampire queen. Things had gone from fucked up to welcome to the darkest parts of Hell.

I hated when she did these investigations, but we hadn’t found another way to gain more insight than she could. That damn alpha blood gave her a gift that was a total burden. It drained her, left her too fucking vulnerable.

Kane had the car waiting in front of the door by the time we stepped out. He and Roger had run ahead the instant Jillian passed out. While Kane moved the car, Roger rushed to the gate to let us out.

Rogar seemed like a good guy, for a vampire. Kane really liked him, anyway. I guessed Roger was one of the few Kane trusted. I was beginning to trust Kane. Especially after seeing how he was with Jillian.

I slid into the back seat with my charge, my life’s mate. I’d been by her side since the day she was born. Vowed to protect her, be with her always.

Her head flopped over onto my shoulder, so I nestled her more comfortably against me. Forcing myself to calm, I settled back into the seat and rubbed circles on her back. She is okay. She just needs rest.

Her childhood had been magical for both her and me. I’d kept my word to her mother, and I’d cared for her.

Normally the High Alpha and Queen would’ve chosen a nanny, but I wouldn’t let them. She was mine. When I wasn’t training or in lessons I was by her side.

She’d never cried when I was there. If she was with her mother in the night and she wouldn’t calm, they’d send for me. I’d curl up beside her in the big bed beside her crib, and she’d go straight to sleep.

The Queen had called me her miracle worker and soon convinced me to call her Tina. The High Alpha insisted on Grey. It took longer for me to be able to do that.

Jillian murmured in her sleep, nonsense I couldn’t make out. Voss’s head whipped around. “Did she say something?”

“Nothing that made sense. She’s having a nightmare, I think.”

Voss shook his head, frowning. His wolf was in his eyes. “I don’t want her doing this anymore.”

I almost laughed at him. He should’ve known as well as me that Jillian didn’t take orders from anyone. “I don’t think it’ll leave any lasting damage. And you know what she’d say if she heard you say that.”

“Listen, I know you think you know her better than I do, and maybe you do. But that doesn’t mean I don’t get an opinion or a vote,” Voss glared at me, angry. He was really over protective.

I was, too, but I’d learned early on to let Jillian take care of herself. I had her back if she needed it, but not before she needed it. Usually.

She’d been a beloved friend to me as she grew, a little buddy. We’d played, laughed, and eaten far too much candy and sweets. I’d indulged her every whim.

As she’d aged, she came to me with her problems. When she was very small it was stuff like skinned knees and friends taking her toys. It turned into friendship problems, then eventually boys.

At some point when she was in high school, my protective, almost brotherly affection for her morphed into something else. It didn’t happen overnight, but one day I realized I didn’t want to play board games with her any more. I wanted to play other… dirtier games with her.

I was thirteen years older than she was. She was seventeen, and I was thirty. Hardly the picture of who a father would want to date his daughter.

The pull grew stronger as she aged. When she brought her first boyfriend home, I nearly came unglued. By the time she found Kane, I was about to break. I didn’t know if she felt what I did, but I couldn’t shake her. I hadn’t been able to shake her since she was born. And I didn’t want to.

“Why isn’t she waking up?” Kane asked, eyeing us in the rearview mirror as he drove us home.

I focused on her, matching my breathing to hers like I had when she was an infant and wouldn’t stop crying. There was a bond there, and I could sense her. It wasn’t overt or obvious, and I hadn’t tried since she was a small child.

But it worked in that moment. I was able to connect with her, feel what she was feeling. Maybe that was what my mom meant about being a healer. My empathy allowed me to sense others’ emotions. Jillian was one of the few I could truly connect with. “She’s not hurt. She’s exhausted. She needs sleep is all.”

“How do you know that?” Voss asked suspiciously.

He just raised his eyebrows at me.

I sighed and gave him an abridged version of how I came to be Jillian’s first sentry. I included the part about my world shifting when I laid eyes on her as an infant. I didn’t tell him that my loneliness disappeared that day, and the hole my parents’ death had left began to fill.

Kane glanced at me several times in the rearview mirror as I spoke.

“No more than you are. Our bond is different.” I smiled down at her. “I think we all need each other in different ways.”