If you love hot witches and an evil plot, then The Divinities are for you. Book 2, DEATH’S STORM, re-released today (10/05/16). It has a new beginning and ending, and it has been expanded and re-edited. Even if you read it 4 years ago, I highly recommend grabbing the new version.

Thank you so much for being wonderful, supportive readers and fans. Now, for your Chapter One teaser… 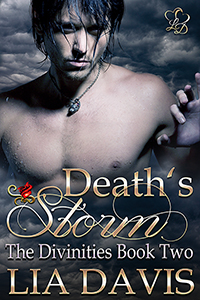 Buildings burned, many with flames about ten stories high. People ran, screaming, in all directions. Children cried in the distance. The thick, inky feel of black magic hung in the air like a wet blanket.

Khloe’s heart ached at the scene. She stood in the center of the Maxville Coven. Only it wasn’t present day—that she was sure.

“Connie?” Noah, a Divinity Elder and close friend of Khloe’s parents, spoke softly, his voice carrying to her despite the noise around her. “Can you help Vanessa with the little ones?”

Khloe jerked around at the sound of her mother’s name. “Mom,” she breathed as she spotted her mother as a teenager. Connie nodded at Noah and immediately directed the children to go with her. Beside her was Vanessa Manus—Noah’s wife and the current priestess of the Maxville Coven.

Tears burned Khloe’s eyes. They were so young.

An explosion, like a large ass bomb, sounded several blocks ahead of where she stood. Khloe jumped, noting her mother and Vanessa rushing into a house with the children. Somehow, she’d been transported back in time. To when the Maxville Coven had been attacked by Khan and his demons—when the Divinities had gained their powers.

Noah had told them the story, but to see it in the flesh was surreal.

A surge of power cut through the air, making the hairs on her arms stand on end. Turning, Khloe watched as Hecate appeared in front of Noah, Kristoff, and Melaina. “Are you ready, my children?”

The shock on their faces told Khloe they hadn’t expected her. They went down on their knees and bowed their heads without question. “Yes, Goddess.”

“Then stand and let’s kick some ass,” she prompted.

A group of demons flashed in at that moment, then stalked toward them like a wave. Noah narrowed his eyes and thrust his hands straight out in front of him toward the demons. White light left his palms and hit the first couple of demons, sending them flying backwards into the fiends behind them.

Stunned, he studied his hands as if he didn’t know he possessed that power. He lifted his gaze to Hecate. Khloe followed his stare and saw the goddess engaging four demons. They charged her two at a time, and then all four at once. She was too fast for them, Khloe mused before Hecate took a hit in the side that made her cry out. Khloe’s heart skipped a beat. When Noah made a move to go to her, the goddess spoke, stopping him. “Don’t worry about me. Use your magic. Think about what you want and will it so.”

He glanced at Kris and Mel, who nodded as if they too had heard Hecate’s command. As a unit, they rushed the demons with powers no normal witch possessed. Although the god-like magic was new to the three Divinity Elders, Khloe had known it her whole life. Well, as long as she could remember. The ability to connect to the elements had always been with Khloe. The power increasing as she grew up.

A roar cut through the night, stealing Khloe’s attention and shifting it to Kristoff as one of the demons swiped a sword across his back. A fierce growl ripped from him as he whirled around to face the demon. His eyes glowed amber like dancing flames. Khloe had heard stories of shifters and knew from her mother that Kristoff was a white tiger. However, she’d never seen him shift. By the way his eyes glowed, and his skin tightened, she guessed she was about to.

“Back off!” Kris called out. Noah and Mel backed off slightly. When they did, Kris threw his hands out in front of him and then spread them wide, sending flames out like a blowtorch to encircle the group of demons.

Khloe smiled while her own hands itched. Fire was her favorite element. Plus, she hated being there, seeing them fight, and not being able to join them.

A moment later, Noah stepped up and raised his arms. The vines covering the trees snaked along the ground, unseen by the demons until they took hold, twining and twisting and wrapping around the demons’ legs up to their torsos.

Mel took that opportunity to call her element. A light breeze picked up, blowing Kris’s Fire toward the demons and feeding the flames.

All together, they sent everything they had into what they’d created. The vines twined around while the air intensified the flames and pushed them over the demons, burning them all in a matter of minutes.

Everything fell quiet. Khloe watched with amazement as Hecate walked toward the three. She was still as beautiful as she had been before the fight began. Then again, she was a goddess. She stopped in front of them and held out an amulet of some kind. About five inches in diameter, it was too big to be worn as a piece of jewelry, but Khloe knew what it was. She also noted that it looked slightly bigger than the one they’d recovered last month.

The center of the amulet was a crystal sphere that seemed to glow with multi-colored energy waves. Surrounding the sphere was a labyrinth-like symbol: Hecate’s Wheel, the symbol of knowledge and life.

“This is the Sinew. It is the source of all magic and knowledge. Guard it with your lives. The demons must never have it again.”  Hecate gave them the Sinew and vanished.

Suddenly, everything faded, like Khloe’s surroundings just dissolved away. A moment later, she stood in a living room that she didn’t recognize.

A woman’s painful cries echoed from the hallway. Khloe rushed to a bedroom at the end of the hall and froze at the doorway. Paul Loomis—a demon living as a human and the father of Kalissa’s ex-boyfriend—knelt on his knees, holding his very pregnant wife, Barbra’s, hand as she gave birth to their child.

The midwife delivered the child, wrapped it in a towel, and started to leave the room when Barbra called out to her. “I want to see him. Why can’t I see my son?”

Panic set in, creasing her forehead and making her shake. Paul tried to calm his wife, then said, “Bring the boy here.”

Khloe had always hated the man, even before she’d found out that he was a demon. Moving closer to Barbra, Khloe snuck a peek at the child she knew all too well was Liam Loomis—the male who’d stolen her twin’s memories to keep her from her true magical partner and the love of her life. The demon had taken precious time from Kalissa and Ayden all because Liam wanted Khloe’s sister for himself. Sick bastard.

“Why does he look like that? Is he okay?” Barbra’s panicked tone made Khloe glance at the baby again.

Her heart skipped a few beats. It wasn’t the slight blueish coloring of his skin, but the black rose on the inside of his left forearm that caught Khloe’s attention.

A Dark Divine. Half witch, half demon.

Just then, Paul’s head snapped up and turned in her direction as if he could see her. Impossible. Wasn’t it? After all, it was her dream. He narrowed his gaze and snarled with a curled lip.

Fear froze in her gut as her father’s face flashed in her mind. Tears stung her eyes, and her nose tingled. Dad. When she reached out to him, he transformed into a black leopard and leapt at her, teeth bared.

She screamed. Her magic ran wild within, and the flares from her connection to the Fire element sparked to life. A moment later, wind blasted through the windows and glass shattered around them. “You killed them!”

“Kalissa?” Khloe heard her sister, but she couldn’t see her. She sounded so far away.

“I’m here. But you have to calm down. Let go of the vision.” Kalissa didn’t make any sense? What vision? She didn’t have that gift.

A moment later, Ayden materialized in front of her and gripped her shoulders, flames crawled up his arms, but it didn’t harm him. He was using his Divinity gift of adaptability—the ability to use others’ powers.

She blinked then glanced over his shoulder to Paul, who bent to kiss Barbra on the forehead. Meeting Ayden’s stare, she frowned. “They killed them.”

“Not them.” He pointed to Paul and Barbra. “Khan ordered it done, and we’ll catch him.”

Ayden smiled, and her surroundings shifted again. When the room came into view, relief flooded her as she recognized her own bedroom. She glanced to Kalissa. “Are your visions always like that?”

“No.” She paused, drawing her brows together. “I’ll put coffee on, and we can try to make sense of it.”

Khloe stared at the ceiling and slowed her racing heart. A tightening in her chest matched Kalissa’s concern that brushed against Khloe’s subconscious. And Ayden didn’t help by closing off his emotions. Sometimes it sucked being linked to an empath.