May20 Comments Off on Their Royal Ash countdown teaser page 2 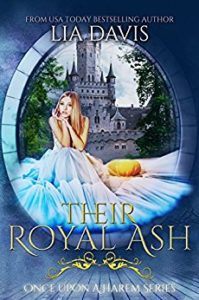 2 days until release day! I’m so excited to share my story from the Once Upon a Harem series. Each day through next Friday (5/25) I’ll post a page from Their Royal Ash.

My step-brothers would find a way to stall them. It was part of the plan to get me out. Elion had come up with it and his two brothers backed him. It was up to me to be quick. Although I feared I wasn’t quick enough if my stepfather was searching for me.

My chest tightened at the thought of leaving them. Hell, they were the only reason I stayed as long as I had. But it was too risky now that I’d fallen for my step-brothers. Each one of them held my heart.

We had to part ways. They didn’t deserve a servant for a girlfriend. The king would kill us all if he found out.

As I grabbed the handle, a shadow fell over me. My heart sank to my feet and fear burned my insides. I close my eyes briefly before glancing at the man standing beside me.

Piercing green eyes stared at me. There was no emotion in his handsome features, but those eyes told me to run and wait for him to find me again. Kieran was one of the royal guards and another that held my heart.

He supported the princes’ plan to help me escape, then find the evidence they needed to dethrone the king. Conell had said with me safely out from under the king’s attention, they would be able to manipulate their father into confessing.

In truth, the guys wanted me far away from their cruel father. I was on board with that plan.

Kieran’s wavy brown hair fell into his eyes as he turned sharply and called out to the others. “She’s not in the kitchen.” He slipped something into my hand and closed my fingers around it. “There is a village about a day’s travel on foot to the north. Go there. Ask for Cathy. She will provide you with what you need to continue on.”

Relief washed through me, threatening my ability to stay upright. I wanted to hug him one last time. To feel his arms around me. We’d be caught for sure if that happened and the bastard king would kill Kieran, then beat me for days.

Tears rolled down my cheeks as I pushed through the door. The sunlight hurt my eyes at first. Pulling out my shawl from the pocket of my underskirt, I wrapped it around my head and ran across the yard to the forest.

Once inside the safety net of the trees, I heard the dogs howl and the guards yelling commands back and forth.

The dogs were Hounds. Vicious, barely sane wolf shifters who were more wolf than man.

I pressed my back against a large tree, trying to slow my breathing.

Peeking around the trunk, I spied the king’s private guard, Jonah, as he stood beside his horse outside the stables. No. My stomach soured. I couldn’t go back there. And he would come after me for sure.

Jonah was a wolf shifter—lethal and cold—and his senses were that of a tracker, superior to the Hounds. Once he locked onto his prey, there was no escape.

Still I waited. If he moved toward me, I’d run faster than I ever had. Then beg him for death once he caught me.

My insides froze when my three step-brothers rode up next to him on their horses. Jonah mounted his horse and directed the princes in the opposite direction from me. My fear spiked. That wasn’t part of the plan. Was it?