Mar13 Comments Off on Excerpt from A Tiger’s Claim 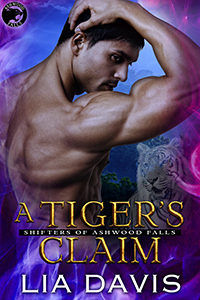 Travis Hunter’s blood froze in his veins at the piercing female scream that echoed through the forest. He was moving just as the sharp scent of blood tainted the crisp mountain air mixed with the rancid smell of the rogue mutants. His night vision, along with the silver glow of the full moon, allowed him to maneuver around the trees with ease. Just before reaching the rogues, he took one last leap and shifted in mid-air, his clothes dissolving in a flash, then replaced by brown fur. He landed on a human-like rogue and locked his teeth onto the male’s throat. With a jerk, Travis snapped his spinal cord at the base of his neck. Dropping the limp body, he turned in time to take the full force of a mutant as he attacked. They rolled in a tangle of limbs until slamming against a large rock.

Travis bit back the pain that rocked through his body. Fury built inside him and called the internal flame he kept contained since the night his burned his den down. Heat grew in his cells, consumed him fully until he glowed in a reddish-orange hue.

The mutant’s eyes grew round in fear with the knowledge that Travis held the power to call fire at will. Or, in this case, out of pure rage. Travis snapped his teeth and growled at the half-wolf, half-man, then slammed his paw into the creature’s chest and shoved the heat into the mutant. The fire consumed him in a flash of orange and blue flames.

Travis whirled away from the screams of the burning male and froze. Several feet away another male, this one in human form, crouched over the still body of a female.  A low growl escaped from his throat as he charged. Travis barreled into the large male. He tackled him to the ground and bit down on the male’s neck, hard enough to break through the skin and bone.

After throwing the dead male aside, Travis shifted back to his human form and went to the female. Crouching down beside her, he pressed two fingers to her throat. Relief washed some of the rage away when a weak pulse fluttered under his fingers. He scooped her up in his arms and carried her home.

Haven’t read this one yet???

Read it now on Kindle Unlimited

or Buy your own forever copy