Apr17 Comments Off on Excerpt from A Mating Dance 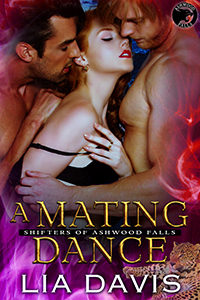 Available at Amazon & on Kindle Unlimited

Cameron Nickels crouched low to the forest ground, her eyes fixed on two rogue wolf shifters, members of outlawed Onyx Pack. She knew they were rogues by the Onyx tattoo on their forearms, and by their scent. Rogues had an unmistakable coppery scent of blood mixed with a hint of dirt and decay.

She shuttered and tried not to breath in the recant odor.

The rogues circled around the trees searching for whoever they’d chased into this section of the forest. Cameron, Blaine and several other enforcers trailed the rogues about a mile outside Ashwood Falls—the wolf/leopard Pack located high in the Smoky Mountains—which, as far as Cameron was concerned, was too fucking close to Pack territory.

The night was perfect for rogue killing—clear, slightly warm, and the full moon high in the sky provided just enough light filtering through the trees. It was almost the end of March, and the air was finally starting to feel like spring.

The warm breeze brought a rancid smell of rotting meat to her senses, much more fowl than the rogues. She growled and focused her preternatural vision and scanned the surrounding area. Three mutants—the Onyx Pack’s half-human, half-animal assassins—stepped out of the tree line behind their rogue masters. Even after fifteen years of being an enforcer, she had never gotten used to the sight of the mutants. They stood twice as tall as any shifter she’d ever seen. They were also frozen in mid-shift, eerily close to the some of the human myths of werewolves.

One of the three was actually a half-puma, and female. Golden hair covered her body and her hands were extended claws. Cameron didn’t need to see her face clearly to know that the bone structure looked nothing like human or beast, but a creepy combo of the two. Sharp cheekbones stretched the skin over the enormous head, making it impossible to miss the prehistoric fangs jetting out of her jaws.

The mutants spread out to circle the rogues protectively in the middle of a group of large oaks. By the way they stood still, like imperial soldiers forbidden to move or speak, they hadn’t realized they’d just become the hunted.