Jun11 Comments Off on Read an excerpt from the HOT new vampire release, Consort 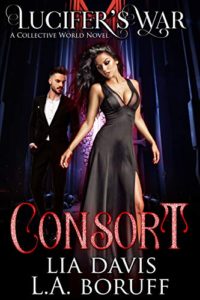 HI! LA Boruff and I are so excited to finally bring you Lilith and Lucifer’s story. For those two love the Collective World, this is a treat and extension in the world they’d been waiting for. For new readers, it’s a tantalizing introduction into the world of vampires and lycans.

The below excerpt picks up from chapter one, present day, and in Lilith’s point of view. ENJOY!

Consort is available at Amazon: https://amzn.to/2USFkg2

Read it FREE with Kindle Unlimited.

Luc’s behavior worried me. I’d never seen him so on edge. And that was putting it mildly, because he didn’t sleep for more than an hour at a time, dividing his time between the portals we used to check on our children and grandbabies and the scrying bowls deciphering his visions. I didn’t know why he bothered with the latter. His visions were never wrong.

Only, this time I hoped they were.

We walked side by side along the halls of the seventh layer of Hell, searching for the source of his vision. Sammael. Luc’s brother and the bastard who set Trinity on my granddaughters. I’d rather have killed him than anything, but it wasn’t up to me.

Luc and I had a hunch that Sammael had shared his power with Trinity. It was the only thing that made sense. How else would she be able to put a blocking curse on the Meda, Tala, and Ami that kept them from pulling on their inherited Hell power and their elements? No one should be able to command that much power. Well, except for Lucian, because Hell was his domain, his creation.

Glancing at Luc, I worked my jaw and studied his profile. All that had happened was his fault and could have been prevented centuries ago. After all, he knew what the future held.

Just another lie he told me. Another secret he kept from me.

Sure, he’d said he didn’t know the hows or who the players were, but he saw the outcome. He also said that he needed me at his side to change the future.

Many days I woke wishing he’d left me to die of the plague all those years ago. This was not the life I had wanted.

However, he’d saved me, turned me into one of the most powerful females in this realm. I hated him for it for a long time. Even now, I harbored resentment.

The only blessing Luc ever gave me was our son, Kane. Luc had graciously let me live on earth to raise Kane, then called me back to Hell when it was time for our son to take the vampire throne. And I returned, because what choice did I have?

Luc curled his fingers around my hand and brought it to his lips, placing a soft kiss to my knuckles. Jerking my hand from his, I snarled, “Are you sure Sammael is here?”

The corners of Luc’s lips lifted in a wicked smile. He always loved it when I resisted him. As much as I hated to admit, the power play for dominance turned me on, making me hate him all the more.

Why did I find him so irresistible? I didn’t want to be attracted to the damn man.

I knew the answer to that question. It was because he was inside me. We were bonded and had been since I woke as a vampire—reborn. I’d fought the draw to him for many hundreds of years but being in Hell and constantly near him made it harder and harder.

That was why I hadn’t stayed here with my son after he was born. We’d stayed for two years, but Lucian had begun to grow on me. I found myself fond of him. Even the idea was distasteful, so I’d moved Kane and myself to Earth to oversee my vampire children from there.

That, and because of Sammael. If it hadn’t been for his actions, Luc probably wouldn’t have let me raise his son on Earth.

“Sammael is here. He may think he can block me out, but there are more ways to track him.” Luc’s features morphed into fierce determination as he grabbed my hand again. This time I didn’t pull away. Sometimes it wasn’t worth fighting him. Pick my damn battles. Plus, I needed his emotional support, not that I would ever tell him that.

We reached the end of the corridor, which was also the beginning of the level we were on, and Luc froze in place. A snarl escaped him, low and soft. Then he turned and backtracked the way we came.

Hell was like a massive office building with never-ending levels that went down instead of up. It wasn’t circular or oval, but somewhere in between, which didn’t make sense if I thought too hard about it. Then again, nothing in Hell made a whole lot of sense at first. It took me years, maybe longer since time moved differently in this realm, to learn the layout and not become confused at every turn. I’d never have admitted it, but I still could get turned around if I wasn’t careful.

This particular level was ruled by the Demon Lord of Envy, Everly. I didn’t know much about her except that she was in Sammael’s harem. Oh, yes. He had a harem. Which would’ve been fine, except most of the women didn’t particularly want to be in his harem.

Luc walked faster, and I felt his fury build through our bond. His eyes turned crimson as he stopped in front of a random door, then kicked it open. Behind the door was a study with wall-to-wall bookshelves and a desk. However, there were no books on the shelves and the desk was bare.

I glanced at Luc and frowned as he crossed the large room to a picture on the far wall. He placed his hand on the left side of the frame and the center opened up. I moved closer, curious about what was hidden inside the picture.

As soon as I got close to the threshold of the room, I gasped and could go no farther. Dark magic swirled around me. It was Luc’s magic, mixed with all the souls damned to Hell. I stood in the doorway of the contracts vault. That’s what the room was.

And it was empty. “Luc,” I whispered.

He looked at me absently, then waved his hand. I stumbled in the room and realized it extended farther than I’d realized from left to right.

I’d known Sammael had taken the scrolls, each one imbibed with a piece of the soul that had signed themselves over to Lucian, but I’d never seen the vault for myself. The room was enormous. The far ends were in shadows, so I couldn’t tell how far it went.

“I knew it was coming,” Lucian said absently as he stared at the empty vault. “I knew when we were helping the girls. But it’s happened for sure, now.”

Consort is available at Amazon: https://amzn.to/2USFkg2

Read it FREE with Kindle Unlimited.