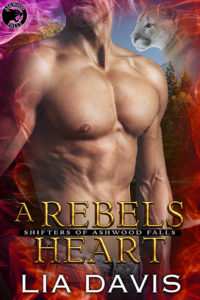 Widow and mother of five full grown males, Sarah Matthews lives the best she can—one day at a time. Now that her babies are having babies, she relishes in spoiling her grandkids. But her inner mountain lion is restless and Sarah can’t shake the feeling something is lurking in the woods surrounding her home. The unease becomes a reality when a man she thought died with her mate five years ago comes back into her life with trouble on his heels.

Damian Palmer never considered revealing his existence to his best friend’s widow. Hell he didn’t know how she’d react to knowing that he was alive for the last five years while her human mate was dead. When he got word that Sarah has become Shield’s—a human rebel organization set up to hunt and kill shapeshifters—next victim, he must go to her and uphold his best friend’s dying wish to keep Sarah safe.

Buried pain, old lies, and dangerous secrets aren’t enough to keep the sparks from flying as they try to survive a new threat against their race.

Goodreads reviews for A Rebel’s Heart

Sarah Matthews was tired. Life had become lonely and less exciting. Sure she had her kids, but they had their own lives, their own families. It just wasn’t the same, and considering she’d lost a part of her soul it had become an effort to just get out of bed some days. Her mate had died a little over five years ago in a car accident that, until today, she’d believed just that.

A case of being in the wrong place and all that.

However, today she received a package that made her wonder if her mate was indeed murdered. She opened the mailbox and frowned at the small box inside. Pulling it out, she studied it, suspicion twirling inside or mind. She put the thing to her ear and listened. She didn’t know what she’d expect to hear. A ticking from a bomb? Now she was being ridiculous. She rolled her eyes. “Ever so suspicious,” she muttered to herself.

There was no return address, nor was there a receiving one. That was odd. It was like someone had placed it in the mailbox. She didn’t hear any vehicles stop or even slow down in front of her house last night or this morning except for the mailman a few minutes ago. With her supernatural hearing, she’d heard a car pull up. Even her puma would had sensed another shifter in the area. Yet her senses didn’t go off.

Another mystery about the box in her hand.

The only writing on the top of the box was her name, hand-written.

Curiosity crept in, and after a quick sniff to make sure there weren’t any non-ticking explosives inside, she opened the box. Cold sensation went up her spine, and a hot fear burned her belly as she peered at the contents. Tears blurred her visions, and each heartbeat hurt as the wound that had slowly healed over the years was ripped back open. Inside the box was a gold wedding band with the words my love, my soul engraved on the inside. It was identical to Walt’s.

The ring he’d said he lost while working.

Underneath the ring was a slip of paper that read: You’re next.

Unable to go back into the house she and Walt had bought together, lived in, raised Nevan, and filled with their love, she ran into the woods, seeking some kind of peace. The tears fell in fat drops, soaking her cheeks and making it even harder to breathe.

She came to a stop at a large oak tree and dropped to her knees while she cradled the ring to her chest. The raw pain transformed into anger toward the sick bastards that could have done it. Whoever they were.

She peered back at the note. The two ugly words blurred as a tear dropped on them. Did this mean that Walt had been killed? If so, why? What would be the point of killing her? She didn’t have any enemies that she knew of anyway. And Walt…he was the most gentle and caring male she knew.

The sound of footsteps running in her direction made her stand and shove the note and ring into her pocket as her cat instantly went on alert. She scented the air and was relieved when she didn’t smell the acidy sweet smell of the Onyx Pack’s mutants. The half-animal, half-human creatures were not only gross; they were more powerful than she was.

The scent she did pick up belonged to a human, but there was another scent she couldn’t place, though it seemed familiar. The pounding of shoes hitting the earth grew closer, and she ducked behind the tree, unsure of what the human was doing in this part of the Smoky Mountains.

A human male ran past the tree, turned to look right at her as if he knew all along she was there, and pointed a gun right at her. Sarah gasped and fell to the ground a split second before he fired. Scrambling on hands and knees, she crawled around the tree and froze as another man barreled past her toward the human. The new man wasn’t a man, but a male puma shifter.

And she knew him.

No, not possible. Damian had been in the car with Walt at the time of the accident. He’d died right along with his best friend. She’d seen his body, damn it.