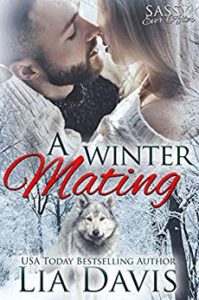 Read it FREE in Kindle Unlimited

Preschool teacher, Everly Wright loves her job and the people in Blue Creek. After the heartbreak of Brady running out on her, she has finally found peace. That is until Brady shows up with his sexy smile, dangerous good looks, and delusions of claiming her as his mate. All she has to do is ignore the desires he ignites within her.

Wolf shifter, Brady Hudson has loved Everly from the moment they met at the age of four. He broke her heart and her trust three years ago when a family emergency pulled him away without a chance to explain why he had to leave. He returns to Blue Creek with one goal, claim his mate. Convincing her that she belongs to him will be his toughest challenge, but he’s not above using seduction to get what he wants.

Brady isn’t the man he was when he left town. After all, turning in his rogue father to the enforcers of the local pack in California and becoming the guardian of his thirteen-year-old half-sister changes a person.

When Brady’s sister is taken, he is faced with having to leave his mate, again. However, Everly isn’t letting him go off to search for the teen alone. They will work together to find his sister and the rogue who took her. And this time, Brady will do what he should have three years ago–kill his father.

Goodreads reviews for A Winter Mating

“It’s great to see you again,” he muttered to himself as he made his way to the living room. A sense of feeling like a dump-ass-adolescent on his first date overcame him. Fuck, he was pathetic. It didn’t go unnoticed that she hated him for leaving.

She was right. He should have called. But hearing her voice would have driven him insane when there was no way he could return to her at the time. Writing a letter seemed pathetic. So was doing nothing.

Glancing around, he noted that not much had changed since he left. The walls were still the soft cream color and the curtains were the same white lace her mother had hung when he was a pup. The carpet, however, had been replaced with ceramic tile. He wondered if it was a recent change. Except it was a week from Winter Solstice and Everly hadn’t put any decorations up.

She said she was waiting for her kids. He knew it was her preschool class she taught at the elementary school.

The shuffling of bare feet of the tile floor stole his attention. Glancing toward the archway of the living room, his heart stilled for the second time since arriving at her home. Everly’s silky blonde hair hung loose around her shoulders. Although she smiled a warm, brilliant smile, her golden-brown eyes held a hint of sadness.

His dumb-ass put that sadness there.

He was so absorbed in his jealousy and wandering thoughts, he hadn’t noticed her leaving the living room. Rushing forward, he took the tray of snacks from her and sat it on the coffee table. She moved closer and brushed his forearm with hers. The skin to skin sent a jolt of electrifying need through him.

“I can do that.” She glared at him, but he could scent the desire rolling off her. That gave him hope. Maybe she wasn’t unaffected by the mating urge as he thought.

She rolled her eyes before she held her hands up and dropped onto the sofa behind them. “If you insist.”

There was a softness in her tone that eased his wolf a little. He sat beside her on the sofa and allowed silence to fill the space between them. He didn’t know what to say or where to start.

After a few moments, Everly faced him. In a rush, she asked, “Are you mated?”

Her rose scent sharpened and her cheeks colored as she averted her gaze to her hands in her lap. Instantly, he took her hands in his. “No, I’m not mated. But I thought you were or at least spoken for.”

She lifted her gazed back to his, her brows drawing together. “I’m not seeing anyone.” Clarity entered her features, making her beautiful, full lips dip into a frown. “Ash.”

The male’s name came out on a growl and Brady couldn’t help but laugh. Everly always growled people’s names when they did something she didn’t want them to. “I take it that Ash is not pursuing you?”

“No. He’s too proud of being single. We’re good friends, but nothing more.”

Brady’s wolf perked up and pawed at him to move closer to her, to cover her in his scent. Claim her like he should years ago. “That’s good.”

She dropped her shoulders and leaned back against the couch. He studied her profile then reached over and brushed a stray hair behind her ear. A soft sigh escaped her a moment before she turned her head into his palm. He smiled. “I missed you.”