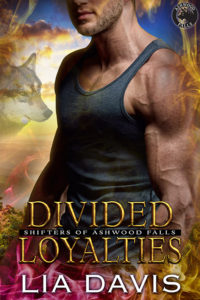 Trained to hunt rogues and protect the human race from the threat of shifters, Christa Baker is beginning to rethink her career choice. Especially when her niece and nephew—who she’s raised on her own—end up in the crossfire. Now she’s looking for a way out and disappear off Shield’s radar for good. She never thought her out would be a gorgeous wolf who kidnaps her after raiding Shield HQ.

Hayden Raines has always followed the rules. As the Ashwood Fall wolf Marshal, he has to set the example for those working under him. When he sets his sights on the beautiful human hunter things go downhill, fast. Fate has a funny way of turning things inside out—because the woman he kidnaps, the enemy he might need to protect his family from, just happens to be his mate.

A snap of a twig had her spinning around into a defensive stance. Some of the tension loosened in her muscles as she stared into Hayden’s green eyes, eyes that glowed, indicating the wolf was close to the surface.

He stepped toward her, and she planted her feet, not daring to move. If she ran now, he’d chase her down. She didn’t want to know what he would do when he caught her.

Oh, she could guess by the way he prowled toward with a hunger in his eyes she’d never seen in any man.

A crooked grin was his reply before he stopped inches from her, looped one arm around her, and pulled her against his body, hard. Then his mouth was on hers, his tongue pushing through the seam of her lips. One of his hands glided up her back and into her hair, where he fisted a handful and pulled just enough to bring her into submission.

He walked her backward until he had her pinned to the trunk of a large tree. Her skin felt as though it were on fire. Every inch of her was too sensitive, her body too aware of the dominating male who held her trapped.

In that moment she was too tired to fight. She wanted him like she’d wanted no one before. He ignited a need deep inside she couldn’t deny.

He broke the kiss and held her gaze for a brief moment. “I can’t hold back any longer.”

And she could fight the pull to him anymore. Breathless, she offered him a crooked smile and said, “Then don’t.”

She nipped at his lip, drawing a sensual smile from him. Her breath hitched at the sight. He was gorgeous when he smiled.

Hayden dipped his head to place a kiss on her jaw then her neck and down. When he reached the sensitive spot where her neck met her shoulder, he bit down. She cried out and fisted a hand in his hair. She felt her panties go damp as her pussy throbbed, needing his touch.

She moved against him. “Hayden.”

He growled softly and claimed her lips again as he unfastened her jeans. Breaking the kiss, he slid the denim down her legs, taking her panties with them.

She raised a foot to free one leg from the jeans. When she went to set it down, he gripped her ankle and draped it over his shoulder. Christa stopped breathing for a moment as she peered down into his green eyes. She held his gaze as he inched closer, taking his sweet-ass time. Anticipation coiled in her belly and made the need to have him touch her, pet her, unbearable.

Patience wasn’t her strong suit, and this slow torture Hayden was putting her through was going to break her.

He kissed her thigh. She shuttered and closed her eyes. If he didn’t hurry the fuck up…