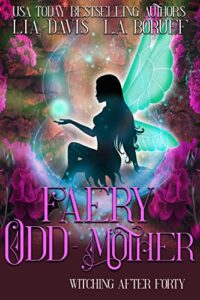 Olivia Thompson has lived a big life. Married straight out of high school, she had two kids, went through a messy divorce, but then, she had a second chance. She found love again with one Sam Thompson, Shipton Harbor police officer and all around good guy.

Then came Sammie, her late-in-life son, and a few years later, Ava, her now best friend and partner in crime. Ava changed Olivia’s life for the better, introducing her to the world of witchcraft, necromancy, and all sorts of other paranormal goodies.

Olivia was always on the outside of it, though, helping her witchy best friend through her supernatural life.

Until Olivia discovered that her birth mother is a Fae. And then, shock of her life, she discovered her birth father is none other than Lucifer himself. Or maybe he’s Loki. He’s been called both.

Now, Olivia must come to grips with her new reality, meet her new magical family, all the while keeping her grown kids from losing it over this new development!

Is it bad that she’s low-key so excited about it all?

I skipped up the steps to Ava’s house, glaring at them as I went, not trusting that the boards would stay in place. I was excited to be here, but Winston—Ava’s magical house—liked to mess with me. Especially when Ava wasn’t around. It was a good thing she was here. Still, I wasn’t having any of Winston’s nonsense today.

It was check-on-the-blob day, and that was always interesting. The blob, in case you haven’t heard, is what my witch best friend Ava pulled out of the Inbetween, which is a sort of spirit world.

Sad, but since I was the only one who could see the face within the inky stuff, Ava had started asking me to come while she tried numerous things to get the mass to revert into the beautiful Fae she used to be.

“Ava,” I called when I walked inside. Winston was behaving today, which meant Ava had to be home. But I already knew she was. It was too early for her to be up most days.

For whatever reason, Winston didn’t care for me. Either that or he just liked to mess with me. I hadn’t figured out which it was. It made me cautious. I didn’t fear him, exactly, because somehow I sensed that he would never intentionally harm me. He just liked to be annoying.

Larry, an animated dead person, brought back to life by Ava, walked by with a bag of chips in one hand and the TV remote in the other. His brown eyes twinkled with renewed life. He nodded his head to the side to move a swoop of his brown hair from his eyes. “She just got out of the shower, by the sound of Winston’s pipes. She’ll be down in a minute.”

I nodded and joined him and Zoey, an undead tiger shifter also animated by Ava, in the living room to wait. For a ghoul, he sure did eat a lot. So did Zoey. As I eyed them, I couldn’t help but wonder. Did they have to poop? Pee?

Ew. Some questions didn’t really need answers. No way was I asking. Magic was freaking weird. But I loved it.

A few minutes later, Ava bounded downstairs and stopped short. “What the heck?”

I looked at her, no idea what she was on about. “What?”

She held out her hands, standing at the bottom of the stairs, then looked toward the kitchen, where she could just see the kitchen table. “Where are the donuts or pastries?”

I moaned and rolled my eyes. “I’ve spoiled you. That’s why I need to stop. You’re worse than Sammie.”

Normally, when I came over early like this, I brought breakfast. Some sort of pastry or yummy thing. I’d dropped Sammie off at summer camp this morning kind of late, so I’d come straight over here. Didn’t pass go and all that jazz. I cast her a playful scowl and said, “You’re cut off.”

Alfred, yet another ghoul animated someone else, but then the control of the ghoul had been transferred to Ava—she was pretty powerful—came shuffling around the cabinets in the kitchen, holding a stack of pancakes. “Are you hungry?” he asked in his high-pitched voice. “I made breakfast.”

I arched one eyebrow at Ava. “See? You’re covered.”

Since I hadn’t taken the time to eat, I sat down across from Ava and dug into Alfred’s delicious cooking. “I don’t even miss Winnie being inside you,” I told the ghoul. “You’re the real MVP of the kitchen, aren’t you? Don’t be modest.” Alfred had previously housed Ava’s dead Aunt Winnie within his undead body. She was currently in her own undead body, thanks to Ava. And yes, there are more. Ava gets around. Heh.

He inclined his head and chuckled. “I suppose so.”

After Ava and I gobbled up the pancakes, we headed down for the beach. “So, where are Beth and Winnie today?” I asked. Beth, Ava’s mom, was also—you guessed it—undead. Another ghoul. Ava had enough power to make all these creatures look normal, though. A passerby would never know they were essentially zombies.

“Volunteering at the hospital,” she said. “They’re on a covert mission to find women of the right age who are in comas or whose souls have moved on but their bodies are in pretty decent shape. We’re hoping I can move them into actual living bodies.”

I whistled through my teeth, impressed. “That sounds complicated, though. Will they take on the persona and life of the person whose body they’re taking over?”

She shook her head. “We’ll have to do glamours, at least for a while. They’re even thinking about renting a house a few states over, looking for a hospital far away to do this so that the family of the body won’t be nearby.”

I grunted. “Maybe they could go to Philly. Stay with those vampires.”

She stopped and stared at me. “You know, Wade could probably use some more training. That might not be the worst idea.”

Of course it was a good idea. I’m a delight.

We reached the cave, and the inky blob appeared at the entrance, against the barrier. As usual, the woman’s face turned from sad and dejected to desperate, almost frantic. She slammed against the barrier, shouting something, but no sound came out. Not in that form.

“She’s doing the same thing,” I said, describing the face to Ava in hopes of giving her some clue that would help her figure this out.

“Okay, I brought some herbs to try to let her absorb. Calming things like ashwagandha, camomile, valerian, lavender.”

I shrugged. For all I knew, that would work like a charm. “Want me to do anything?”

Ava held out a satchel. “Yeah, hold this open for me, right near the barrier, okay?”

Keeping my eyes on Phira as she freaked out, I shuffled closer and held the bag open for Ava to combine the herbs in a bowl.

I managed to catch myself, but the bag went flying, and as I got upright, I gasped in horror.

I was inside the barrier.

Lunging toward the shimmering wall and away from the evil blob, I tried to get out but bounced off of it. Recoiling, I looked up in horror at Phira. She loomed over me, and the face inside looked as shocked as I felt. Once again, I tried to push out. “Ava!”

I could barely hear her on the other side of the barrier, but she was screaming too, by the look on her face. “I thought this thing only worked on supernaturals!” I yelled as loud as I could. Supposedly humans would’ve been able to pass through or back just fine. And I was human!

Phira came closer so I backed away, but then I stumbled again, hitting the back wall hard. “Ah,” I yelled and gripped my arm. Blood poured out of a long cut and dripped past my fingers. “Ava!” I screamed as the ink reached out.

It touched my blood, and then… it changed. Light glowed from behind Phira’s face. Warmth, happiness, and love poured toward me, wrapping me in a cocoon of safety and caring.

“What is going on?” I whispered. “How is this happening?”

The darkness receded, replaced by a nearly blinding white light. I had to look away, out toward Ava, who stood with her hands up and jaw unhinged.

As I watched, the barrier dropped and Ava rushed in. She grabbed my arm and pulled me out of the cave.

When the light faded, we looked back to find Phira, a beautiful, graceful Fae, strolling toward us with the happiest smile on her face.

When the sunshine hit her face, she stopped and looked around, then her gaze landed on me. “Oh, Olivia, my daughter.”

She kept searching outside the cave as if trying to find someone. “But where is your father? Where is Loki?”

“Loki?” Ava and I exclaimed at the same time. We stared at each other in shock. “Don’t you mean Luci?” Ava asked.

Phira furrowed her brow. “No. I mean Loki. The man who has been trying to help you get me back to myself. My true love. Olivia’s father. Loki of Asguard.”