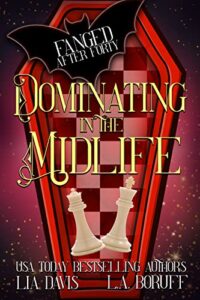 Newly mated vampire, Hailey Whitfield has a long to-do list that involves protecting her brother, dealing with newfound powers, and plotting to take over the entire vampire political leadership system.

It’s not enough that she and Jax have done everything the council asked. Yeah, sure, there were some rocky roads and a little defiance on her end, but they managed it.

Still, Soran and Gretchen aren’t happy. Something to do with a prophecy about Jax and Hailey being the new power couple that could bring an end to the council.

Well, they have a right to be paranoid. Don’t mess with Hailey and her tight circle of family and friends. It won’t end well.

When Hailey and the Bond Girls track down a skip who isn’t human, they have decisions to make. But this skip has information Jax and Hailey need to implement their plan for dominating the midlife.

Their lives, along with those of the vampire race, are about to change forever.

Goodreads reviews for Dominating in the Midlife