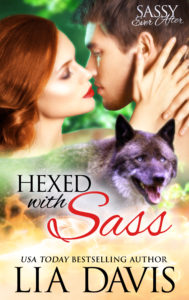 Sassy Ever After story

Read for Free in Kindle Unlimited

Goodreads reviews for Hexed with Sass