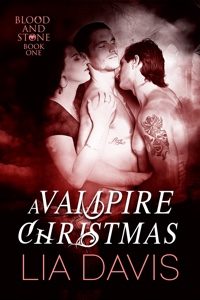 Available in Paperback at:  Amazon | B&N

The hunt for the past will set their future…

Alasdair Morgan, vampire lord of the south Atlantic region of the United States, and his mate, Gideon, are on the search for an ancient journal. The secrets the book holds within its leather binding can be used to destroy their race’s queen, Lilith. When they finally find the journal, they discover it has been sold to an antique store. However, a female with her own agenda has her sights set on possessing the book.

Some gifts come in twos…

Being a half-breed living among humans, Rhianna Howell knows the importance of secrecy all too well. When she discovers one of the lost vampire artifacts, she doesn’t waste time in collecting it before it falls into the wrong hands. But keeping the journal safe from evil will put her in the seductive path of two vampires who claim to be her mates.

The days and nights heat up this Christmas as she discovers a fiery passion she can’t deny or run from.

Alasdair glanced up from his computer as Gideon, his best friend and lover, burst through the mahogany double doors of the study, tablet in hand and a brilliant smile on his handsome face. The bright gleam of excitement in the other vampire’s gaze sparked Alasdair’s own. Could it be? After two centuries of searching, had the journal been found?

Gideon’s light brown hair hung in his eyes as he crossed the white tile floor. He stopped in front of the desk. When their gazes locked, Alasdair knew the male had indeed found the book. Alasdair held his hand out and the other male handed over the tablet. The image on the screen, though fuzzy, was identical to the leather-bound journal he’d been searching for. He was sure of it. He’d spent many nights of his youth reading the stories his grandmother wrote of her life. The Morgan family crest—a crouching gargoyle with the letter M in an elegant calligraphy overlaid him like a brand—on the cover appeared to be correct, but it was hard to tell due to the poor quality of the photo.

There was no doubt in Alasdair’s heart that the book in the picture was his great grandmother’s diary. “You did it.” He met Gideon’s stare, a hint of sadness clouding the blue depths. “What?”

Gideon dropped into the chair across from the desk. The morning light filtering in through the large window behind Alasdair caught the natural blond highlights in Gideon’s hair beautifully. Alasdair’s hands itched to comb through the silken strands, and reward his lover for finding the journal.

“I traced it to an antique shop In New York.”

Fuck. “I’ll call Julian and get clearance for you to fly right away.”

“Wouldn’t that take too long? Couldn’t you have Julian run down to get it?”

“Julian doesn’t run to get anything. He may be like a brother to me, but he doesn’t do anything himself. I don’t trust anyone but you to collect the journal.” Alasdair picked up his phone and pressed the New York vampire lord’s number.