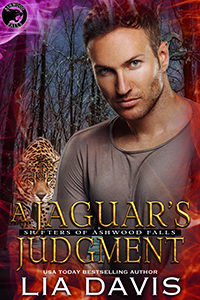 Sable Darwin has run from her destiny for too long. Stepping away from her role as Beta of the Onyx Pack, she chooses to take her chances and face judgment for her crimes. Her only hope for survival is to trust the male who ripped her heart out and turned his back on her so many years before.

Jared Nickels’ only loyalty is to the Alphas of Ashwood Falls. When he sees Sable again after fifteen years, he can’t stop himself from touching her. Through his Justice gift to see others’ pasts, he learns she’s not as guilty as he’d assumed. She’s actually one of the biggest victims in the war that her parents started.

When the war shifts in favor of the enemy, Sable and Jared must band together to put an end to the threat. Or die trying.

Goodreads reviews for A Jaguar’s Judgement

The light dusting of snow crunched under his shoes as he made his way to the building that had been used for storage until a few weeks ago when Sable had turned herself in. She had fought with the Pack and helped Ana direct her power. Jared understood why. Sable had protected Ana since Felix stole her from her mother’s womb. They were sisters in every way but blood.

The selfless act, knowing she would be taken into custody, added another crack to the wall around his heart.

Jerking the door open, he entered the one-room building and froze mid-step as the floral scent of his mate slammed into him. Closing his eyes briefly, he slowed his breathing and pushed away the storm of desire brewing inside of him.

When he opened his eyes, he scanned the small space. The room didn’t look like a cell. It was a damned apartment. An area rug covered the floor at the center of the room. A mini refrigerator sat in the corner with a microwave on a shelf over it. The only personal item, however, was the female’s duffle bag in the far corner. His gaze found Sable sitting in the middle of a futon with a tablet in hand. “They let you have Internet?”

She didn’t look at him. “It’s bugged. They watch everything I do.”

Her voice carried a hint of tiredness, along with annoyance. He bet the latter was due to his presence. Good. “Find anything interesting?”

She didn’t answer. His cat growled and clawed at him. The man stood his ground in the doorway. The cold breeze helped to keep his mind clear.

“Close the door or leave. Better yet, do both.” She picked up a cell phone and typed something before setting it back down on the cushion next to her.

He tracked her movements, curious who she was texting and why. Without conscious thought, he drifted closer to her. Each step made it hard to maintain control over his need to touch her, yet he couldn’t stay away. Yes, he was an idiot.

The door slammed shut, jarring him out of his thoughts. He snapped his gaze up and met her teal eyes, glaring back at him.

You, naked and panting. He shook his head. The lack of sexual release had made him insane. However, Sable was his mate. Enemy or not, he’d want her like no other and wouldn’t rest until he had her. Yep, he was fucked.

“Have you talked to Nigel?” It was the only thing Jared could think of to say. Because “I want to fuck you senseless” just didn’t seem appropriate.

Sable’s lip thinned. “Yes, I speak to him all the time. Like you, he has access to this shack.”

He ignored the growl of irritation in her tone and crossed his arms. “Rhea says he’s very advanced and could start taking some college courses online.”

“I know. I met with the den mother this morning.” Sable returned her attention to the tablet. “Why are you really here, Jared? You’ve never been big on small talk.”

“Why didn’t you tell me about him? Why did I have to find out from Kieran?” Anger filtered into his words. Nigel was his son, and he deserved to know who his father was. “Better yet, why did you tell him I was dead?”

Sable jumped to her feet and came nose-to-nose with him. “You hurt me, Jared. I didn’t want to see you again or have you in our lives. Besides, you were dead to me.”

He peered into her eyes, searching for any sign of untruth, but what he found made his chest constrict around his hammering heart. There was true pain in the depths of that teal-colored gaze. Hardening his stare and masking his own emotions from her, he bit out, “Your betrayal wounded the bond, not me.”

She didn’t flinch at his harsh tone. She’d always been good at hiding behind that sheet of ice around her heart. “What was I supposed to say? Oh, by the way, my father is the boogieman of the shifter world? The king of all bastards. I’m sure that would have gone over well.”