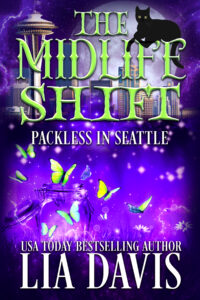 Things got off to a shaky start, but Matilda Carol is settling in and grasping her newfound independence by the horns. Figuratively speaking, of course.

Now that her life is purely her own, this half-wolf shifter, half-witch has a lot to learn and do, but she also has responsibilities and bills to pay. Even with her abilities, finding a job proves more difficult than she thought, but she refuses to give up. The universe will reward her determination when the time is right.

In the meantime, she’s juggling the dating phase of her relationship with Talon. This mating dance confuses her, but not as much as the news about her supposedly dead father. Turns out he’s very much alive, and in Seattle. How can she possibly avoid him when he has answers about her growing powers and her destiny?

And just as she settles into her place in the local coven, a relic the group is sworn to protect goes missing. Charged with leading a team to locate it, Mattie must brace herself for battle because the thief isn’t giving up easily and doesn’t mind killing to protect their secrets.

Goodreads reviews for The Midlife Shift

“I can’t believe you got a cat,” Julie said, eying the small, black kitty chasing a ball with a bell inside it across the living room floor.

“I know. Isn’t she a cutie?” I leaned over the arm of the couch and wiggled my fingers, catching Trixie’s attention. The feline lowered her body to the floor then did the wiggle-butt until she pounced, making me jump and laugh. “Besides, I didn’t get her, she came to me,” I added while Trixie chewed on my fingers.

Julie had been my best friend for about four years. We met when I finally talked my jerk of an uncle into allowing me to work outside the pack territory. Yes, me at the age of forty had to ask permission to leave pack land. I understood when I was younger, and he claimed to be protecting me. The Claws Creek Pack was not a healthy pack. It used to be until Roger went psycho not long after my mom died. The pack members were rowdy, arrogant, and meaner than a nest of snakes. Most of them were, anyway.

I spent a lot of my time alone, avoiding others. Especially the males. And I helped part-time in the nursery because the littlest members needed protecting, too.

After pushing Roger and nagging about wanting to work outside the pack, he finally gave his permission. I took the first job that would hire me without work experience—a privately owned diner. That’s where I met Julie. She saw me and decided we would be friends for life.

Little did I know at the time that she was sent to watch over me. She and Felix—the vampire leader of Seattle and the surrounding area—had plotted to get me out of my uncle’s pack. That was a promise the two them made to my mother before she died when I was fourteen.

“So, how many people know about your plan to rescue me from Roger?” I kicked a pink ball with a bell in it across the living room and watched Trixie chase after it. She slid sideways as soon as her furry paws hit the kitchen floor.

Julie watched the kitty, too, and shook her head before answering my question. “Only a select few that needed to know. Each one was spelled to not be able to speak your name or anything about you to others.”

Oh, nice. Even though I felt safe for the time being, I still had that fear deep down that one day, my evil uncle would find out that I was alive and would come after me. However, I refused to let that fear rule me.

After a few seconds of silence, Julie said, “Tell me about Talon.”

My wolf perked up at the sound of our mate’s name. I couldn’t stop my lips from curving into a smile. “He’s nice.”

Nice to look at. And he smelled amazing.

“He’s my mate.” I held up a hand before she could run with that little tidbit. “Don’t start. I’m not sure what to do with him. Yes, I know that meeting my mate is the best thing ever and I’m thrilled that Talon is him. But I just got out of a controlling situation, I want to enjoy my freedom for a while.”

Julie pursed her lips at me then said, “Your fated mate would never treat you as an omega like your asshat of an uncle did. Talon is the last person you should worry about controlling you.”

“I know.” And I did. I just didn’t trust it. That didn’t mean I was going to run for the hills. At least not unless Talon was going with me.

I inhaled at the thought of him, getting a whiff of his scent that lingered in the air because he was over here all the time. A flash of warmth flowed over me as I drew in more of his scent. At the same time, my magic flared inside me. Sparks of energy arched off my fingers.

What the heck was that?

As I thought them, Julie spoke the words out loud. “What was that?”

“No. It’s actually cold in here. What do you have the thermostat set on?”

My best friend started at me for a long while. “How long have you been having hot flashes?”

“A while, I guess.” It wasn’t a constant thing. In fact, I’d never had one as bad as the one that was rocking my system today. “But I never got a magic flare like that one, either.”

I picked up my phone and texted my neighbor, Anya. You home?

Anya Sutton wasn’t just my neighbor. She was one of Felix’s enforcers and one of my protectors. She was also a witch and the daughter of the Seattle Coven leaders, Sage and Conrad Sutton.

“Anya is on her way over,” I said, setting my phone back on the end table. “I’ll ask her about the magic flare thing.”

“Well, the hot flashes could be a midlife thing.” Julie picked up one of Trixie’s toys and shook it, drawing the kitty’s attention.

I smiled, watching Julie play with the cat. It had worried me that she wouldn’t like Trixie. Julie typically didn’t like pets. Or people. Seeing her so accepting of Trixie made me happy.

There was a knock on the door, and I waved my hand to open it. Julie met my gaze and smirked. “You are getting more comfortable with using your powers.”

“I don’t have to hide it here.” I didn’t have to worry about Roger seeing it. He would, for sure, use my power to create chaos and destruction.

After closing the door, Anya came over and sat in the armchair to my right. “Hey, guys.” She smiled but I sensed that something was wrong.

“Spit it out,” I demanded. I hated to be left out of whatever news or gossip someone had.

Anya laughed softly and scooped Trixie up, placing her in her lap. “Mom called. She has an assignment for you. Well, for us since Julie and I are your protectors.”

I sat up straight. The idea of having something to do, especially for the coven, intrigued me. “What is it?”

“One of the relics from the coven’s vault has gone missing. That’s all she told me. She wants to meet for dinner tonight to go over everything.” Anya watched me, then asked, “Are you feeling okay?”

Anya bobbed her head. “How old are you?”

“It could be a witch’s menopause. With you being half sorceress, you could be going through a change of some kind. Especially since it clear that your powers were bound.” Anya spoke as if it was no big deal. To most, it wouldn’t be. To me, the whole concept of being a witch was new to me.

Sure, I knew I had magic for most of my life. Over the last few years, my powers had grown stronger, leaving me no choice but to fake my death and leave my pack.

“But I’m more wolf than anything. And we haven’t confirmed the sorceress aspect yet.” Maybe I was in denial because sorceresses were supposed to be dark and evil. I was neither of those things.

“I’m sure that you are. Your wolf half will only make you more powerful. Mom knows more about this than I do.” Anya set Trixie down on the floor.

That made sense. I was a hybrid of two species. From what little information I was able to gather from hacking into the paranormal underground databases, hybrids either took characteristics from one parent or a mixture of both species. The latter was something that didn’t happen often.

“I thought witches’ menopause happened around our midlife?” Which was generally around two hundred years.

Julie answered, “You were spellbound at birth. That also could be the reason why you can’t shift.”

Being spellbound didn’t answer my question. Anya must have sensed my confusion because she added, “Your powers will only stay bound for so long. No one knows for sure when they unlock. In your case, it could be your wolf pushing you to man up. Or it could be your need for independence.”

“Or,” Julie said with a smirk. “It could be meeting her mate.”

Anya nodded in agreement. “I’m betting that is it. Talon certainly has an effect of her.”

Both my friends started giggling like a couple of teenage girls. I rolled my eyes and changed the subject. I would figure out the mating thing eventually. “Have you figured out how to open that chest I found in my closet?”

I’d told Julie about the chest the morning after we rescued her from my long-lost crazy cousin, that I knew nothing about. She tried to open it with no luck. We even tried to combine our powers to open it and failed.

Anya shook her head. “No, but I’m still working on it. The coven’s library is huge. It’ll take time to go through the archives. Mom has a theory that your mother left it for you. If that is the case, then only you will be able to open it.”

I thought of that, too. For the life of me, I couldn’t figure out how to break the enchantment placed on the wooden box.

Standing, I stretched. “I’m going to shower and get ready for dinner at the coven. What should I wear?”

“It’s a casual dinner so whatever. I’m going dressed as is,” Anya said as she typed on her phone.  I tilted my head a little, admiring her outfit. Black jeans with black ankle boots and a dark purple t-shirt. Her long, blonde hair hung loose around her shoulders; the ends had large ringlets.

Another second passed before Anya put her phone away and said, “Julie, Felix wants to see you.”

Julie frowned, then rolled her eyes. “Tell him he knows where I am.”

I press my lips into a thin line, trying to hold my laugh in. Julie and Felix’s relationship was a constant game of cat and mouse. I just wasn’t sure which one was the mouse, and which was the cat.