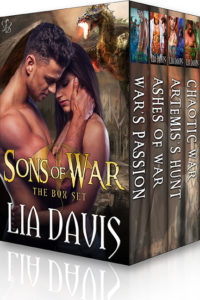 Includes the first 4 books in the series.

As the son of Ares—god of war—Markus Sullivan and his brothers’ number one priority is to stop the earth-born demi-gods from starting another rebellion against the gods. That is until he meets Gwen, the granddaughter of Aphrodite, and the next target of the descendants. Together, their path is rife with passion and danger. It might take more than the son of War to win this battle…Gwen herself.