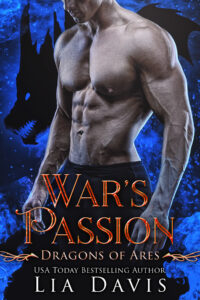 After losing her parents in a brutal attack from a monster straight out of her nightmares, Gwendolyn Preston tries to pick up the shattered pieces of her life. Along with her best friend, she moves to a small fishing village on the coast of Maine to find a new life away from the nightmares that haunt her. Just when she believes her life could go back to normal, the deliciously dark and handsome Markus Sullivan disrupts her hopes to grieve in peace.

Markus drew the short straw when it came to being the liaison between his father, Ares—God of War—and his brothers. When he discovers that the earth bound demi-gods, known as the descendants, have banded together to start another rebellion against the gods, it becomes his number one priority to stop them.

That is until he meets Gwen, the granddaughter of Aphrodite, and the next target of the descendants. Together, their path is rife with passion and danger. It might take more than the son of War to win this battle…Gwen herself.

He nodded. A shy smile formed on her lips as she stepped closer to him. “Do something for me first?”

Unfolding his arms, he wrapped them around her waist and drew her into him. “What does my little love goddess want?”

Her nose scrunched up at the title, and she flatted her hands on the chest. “Change into your dragon.”

Drawing back, he studied her. There was no fear in the blue depths of her eyes, just curiosity.  “Are you sure?”

Her head bobbed up and down. “I need to get over my fears. I trust you, even in the short time that we’ve known each other. If I agree to have sex with you to gain my strength back, I need to be able to accept all of you.”

He pressed a kiss to her forehead, then stepped back, knowing her eyes never left him while he stripped. Her gaze caressed his naked skin and, gods, if it didn’t feel like a physical touch.

Fuck. His body warmed and his skin tingled, needing her hands on him.

Once his clothes were removed, he turned and walked about twenty feet from her. He didn’t want his tail or wings injuring her as he shifted. Turning to face her, he spread his arms. Usually he could shift in a matter of seconds, sometimes faster, depending on the situation, but right now he wanted to take it slow.

Mostly because he didn’t want to scare her.

“What are you waiting on?” she called out, teasing.

The corner of his lips lifted as he visualized his dragon in his head. It was an automatic process. One he’d been born knowing, since he was never a child and most things came naturally to him and his brothers.

Giving into his dragon and allowing the beast to take over, he completed the transformation. The burn of power grew from the center of his chest then shot out in all directions as his body grew and changed in a flash of black and blue.

Extending his wings, he stretched them wide before folding them back into his body. He stared down the beach and spotted Gwen where he’d left her. Only now she appeared to be closer due to the fact he was now the size of a passenger train car.

Lowering his large body into the warm sand, he waited—hoping she wouldn’t have a panic attack—for her to approach him. It was ten painfully slow minutes before she approached. Excitement he never knew before filled him at her acceptance.

Hesitation slowed her steps and when stopped about a foot away from his snout, she just stared.