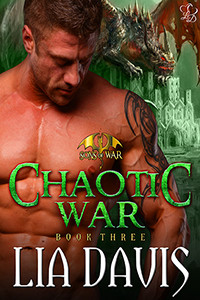 Chaotic War (Sons of War #3) is available for per-order. Resever your copy today!