Happy Tuesday. I thought I’d pop in and share the first page of Chaotic War.

A glimpse into the future? 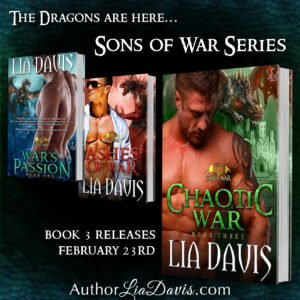 Elle paced the small cage, her hands fisted at her sides. Somehow, Garrick had muted her powers or cast a spell around the cell that kept her from using any of her magic against him. A low snarl escaped from her as she smelled the male at the door to the room he kept her in. “Where is Zavier?”

An evil laugh sounded through the room before he stepped into view. “He will be with us soon.”

“You will burn in Tartarus.”

Garrick moved to a laptop set up on a counter to her right as if unfazed by her taunt. Bastard. Just then, two Imperials—descendants loyal to Garrick—drug a half-unconscious Zavier through the door. Elle’s heart stilled for a moment. Cold fear raced through her, chilling her to the bone.

She gripped the bars and growled. “Let him go.”

The sound of a drawer opening drew her attention to Garrick. The male pulled out the Divine Dagger and smiled. Evil flowed from him. He couldn’t have the Dagger. “That’s the wrong one.”

“I think not. You see…the guardian in charge of protecting the Dagger is insane and easily persuaded.”

He’s lying. Of course, he was. He was an evil, greedy asshat. When she opened her mouth to tell him just that, he faced Zavier, the Dagger fisted in one hand. Elle’s whole body tensed and her blood froze. Before she could get a scream out, Garrick plunged the Dagger into Zavier’s heart.

“No!” Elle jerked awake, her heart pounding, the beats resounding in her aching head. A dream. No, it had been a vision, she realized with a lump in her throat. Zavier. She swallowed a sob and listened. Relief flooded her when she heard the male’s office chair creak on the other side of the curtain that separated her studio from his office.

A sharp pain exploded in the back of her head and arched like electric currents to the font, settling behind her eyes. Ugh. She pressed her palms to her temples and squeezed her eyes shut. The headaches got worse with each vision.

The smooth, husky tone filtered through the cotton barrier, relaxing her. But only a little. “I’m fine.”

Forcing herself to stand, she willed the pain in her head away. More like wished it away. The headaches never left her. They were constant reminders of the dark power that lie within her, waiting to be unleashed.

She stumbled to the worktable and searched for the brush she always used to paint her dream-visions. It wasn’t there. Frowning, she grabbed a new one then set up her palette. Tears stung her eyes as the images whirled in her mind. Zavier was going to die.

No. She couldn’t—wouldn’t—allow it. The future could be changed, right?

If you are new to the Sons of War series. Here is the reading order: