Sep19 Comments Off on The Divinities teaser and a look ahead

Hello everyone! I hope y’all are well on this Monday. I have some exciting things coming for 2017 I can’t wait to share them with you. But first to finish out 2016, I’m completing The Divinities series(at least the main story arc). They will only be available at Amazon for they will be in the Kindle Unlimited program. (Note: Forgotten Visions won’t be on KU until mid-November.)

Forgotten Visions is available for the low price of 99 cents.

I do love The Divinities’ world and do have some standalone stories planned throughout 2017. And a possible spin off. We’ll have to see how well the series is received. So if you want more, share it with your friends as a MUST READ. 🙂

Now for your teaser… 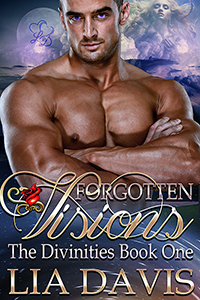 A cool sensation passed over Kalissa Bradenton’s subconscious as she entered her bedroom. She shivered and suddenly found it hard to breathe. A feeling of abandonment rose from deep inside and coiled around her like a cold current. Panic and fear raced through her veins, increasing her heart rate in alarm. The faces of her parents flashed in her mind.

She rushed to her dresser, picked up her phone with shaky hands, and dialed her mother’s cell. No answer. With blurred sight and a lump in her throat, she tried her father’s. It went straight to voicemail. Kalissa’s dread cut through her soul, and the bitter taste of fear rose in her throat as hot tears slid down her cheeks.

Gods no! She dialed again and again. Still nothing. It wasn’t like them to not pick up.

Her parents had driven into Jacksonville for dinner to celebrate their fiftieth wedding anniversary. They should’ve been on their way home.

Kalissa staggered back a few steps as her Divinity gift of visions transported her to the event. One minute she was in her bedroom, and the next, she stood on the side of the highway. A royal blue Mercedes barreled past her and repeatedly flipped across the median and into oncoming traffic on Interstate 10. The sound of crunching metal cut through the stillness of the night, and broken glass littered the ground, trailing to where the car had slammed into a large oak tree.

The heavy, sulfur scent of dark magic flowed on the breeze.

When the vision cut off, tightness gripped her chest, and a lump stuck in her throat.

Pocketing her cell, Kalissa ran from her bedroom to her twin sister’s room on the other side of the second floor of their family home. She charged into Khloe’s room without knocking. “We have to go. Grab a jacket.”

Kalissa ran down the stairs and grabbed her car keys off the small table next to the door. She turned and met Khloe’s watery teal eyes. They didn’t need to speak out loud because magical twins shared a psychic bond. The words they could hear each other think lingered between them. Mom and Dad had an accident. The tears threatening to spill from Khloe’s eyes said she already knew. Instant loss and painful sorrow passed between them. Their Divinity link with their parents cut off like someone had flipped a switch, leaving behind a cold and empty space in their hearts.

A blast of frigid air slapped Kalissa in the face as she stepped out into the frozen January night. She ignored the bite of cold wind against her skin and rushed to her car parked a few feet from the front door.

They climbed into the Audi, pulled out of their driveway, and sped down their street toward the highway at speeds sure to get her a healthy ticket if she were caught. A mile down the Interstate, her heart sank at the scene in front of her. Their parents’ car sat half wrapped around a tree off the side of the road. It was two in the morning, and the few cars on the road were stopped along the shoulder. Beams of headlights cut through the darkness. Concerned citizens stood, observing the scene in amazement and horror.

Kalissa parked her car on the shoulder, pressed her forehead to the steering wheel, and closed her eyes. With deep, ragged breaths she called to her Divinity gift of visions once more. Images of the accident replayed in her mind, this time with more detail.

A man steps out onto the dark highway, illuminated by the headlights of the Mercedes. The wind blows his long black hair behind him and wraps the hem of his long trench coat around his legs. Startled, Troy hits the brakes hard, but they don’t work. He jerks the car to the left and hits an icy patch on the road at the edge of the grassy median, sending the car into a spin. Panic assails him, and he overcorrects. The car slides through the median, hits a dip in the grass, and repeatedly flips into oncoming traffic until it lands in the woods, wrapping around a large oak tree. Troy, and Connie, his wife, die on impact.

Kalissa couldn’t hold back the tears as the vision faded. She let the fat, heavy drops fall from her eyes. She allowed herself to break down. To get it out of the way so she could face the authorities.

After a few minutes, she wiped her eyes, took a deep breath, and opened the door. When she stepped out of the car, the wailing of sirens cut through the whispering voices of the bystanders. Red and blue lights flashed wildly as the emergency vehicles advanced toward the accident.

She met Khloe at the front of the car. Kalissa glanced at her sister and asked, “Are you staying here or coming with me?”

“Me neither,” Kalissa grumbled in reply to her sister’s indecisive answer. She didn’t want to see her parents’ lifeless bodies trapped inside the mangled car. Curiosity pulled at her to investigate, see for herself what had killed two powerful, hard to kill witches. She was sure it was a spell that had killed them, her vision told her as much. Still she wanted to see for herself.

Kalissa held out her hand. “Come on.” They tried not to draw too much attention to themselves in public with their telepathy. It disturbed those who didn’t understand. Although, humans knew about witches and other magickin, they held prejudiced views of the supernatural.

Fifteen minutes later, Kalissa stood with her arms crossed over her chest, scowling at the several policemen from the Jacksonville Sheriff’s Office as they took statements from witnesses. None of which saw a damn thing except her parents’ car lose control.

The slam of a car door drew her attention to the new arrival. Maxville Sheriff’s Deputy, Zach Manus, emerged from his unmarked 2011 Chevy Camaro and stalked toward them, deep sorrow and anger laced across his handsome features. His light brown hair was standing a little more on ends than usual. He stopped in front of them, his frown deepening and his golden brown eyes darkening.

Zach, along with most his family, was empathic. Kalissa didn’t need to tell him how she felt. A flicker of grief laced his features, then disappeared in a flash. He inhaled deeply, facial features blanked, devoid of emotions. He put up his shields that block others’ emotions, she mused. Why hadn’t he slammed them in place before getting out of the car?

He was testing our mood, she thought sourly to Khloe.

“Don’t do that twin thing with me.” Zach gave a forced smile.

“What twin thing?” she and Khloe asked at the same time, trying to look innocent. But it was next to impossible while they stood there wrapped in grief.

His dark brows dipped downward as he shifted to look at Fire Rescue working to get the flattened top of the Benz open. Turning his head back in Kalissa’s direction, eyes narrowed, he said, “You’ve been arguing with them?”

She flicked her attention to him. Yeah, she’d argued. JSO had the most irritating and pigheaded officers. The chief detective hadn’t wanted any insight from her. Prejudiced bastard.

Zach was like a brother to them, and Kalissa trusted him fully. Sometimes, it was hard to remember that he had a serious, responsible side. Around family, he was playful and sarcastic. But tonight, there were no sheepish smiles or factitious remarks.

“They won’t talk to me. I tried to tell them this wasn’t an accident, but they dismissed me like I was nobody.” She hugged her waist, staring back at the crushed car. It had been pulled away from the tree and loaded onto a wrecker. “They shouldn’t have died,” she whispered. What kind of power could kill two immortals like that? Who was that man in her vision? Was he a man at all?

Zach reached out to Kalissa, rubbed her arm with one hand, and took Khloe’s hand in his other to draw her into a comforting brotherly hug. “I know. There is a presence of dark magic,” he said, making Kalissa look into his golden brown eyes. “I’ll handle it,” he told her. “Do not investigate this on your own. I mean it, Kalissa. If you find something or have more visions, let me know. I don’t need you to suffer the same fate.”

Agreeing with Khloe’s telepathic acknowledgement, Kalissa traded glances with her sister. She pushed it aside—for now—and scanned the scene one last time before she climbed back into her car.

A man standing behind the growing crowd of onlookers a few feet away caught her attention. He wore a ball cap pulled down low, hiding his face. There was something about him. Something familiar. She narrowed her eyes. He lifted his head in a sudden movement and looked directly at her as if he felt her stare. Their gazes locked.

A scene from her earlier vision popped into her mind. The man steps out in front of her parents’ car. She concentrated on that scene, stilling it as though she’d pushed the pause button on a TV remote. The eyes of the man in her vision and the eyes of the man looking back at her now were similar. Kalissa stalked toward him without any idea what she was going to do when she got there. Was this the same guy? And if so, why had he caused the accident that had taken her parents away? By damn, she wanted some answers. And Mr. Ball Cap looked guilty of something.

The man moved out of Kalissa’s sight, ducking behind the crowd. She increased her pace. When she arrived at the spot where he’d stood moments before, he was gone.

Had she imagined the whole thing?