I’m so excited about the upcoming release of Marked by Darkness. Here the first 1300 words. Enjoy! 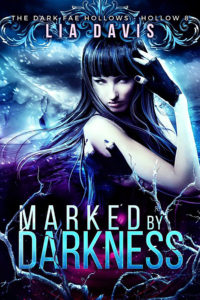 The squeal of delight from my five-year-old sister, Ameria, made the frozen hell we lived in bearable. My whole family made it bearable. They were my world, my rock. The hope was that one day things would return to the way they were before Princess Crystal rose from the dead and turned our beautiful wintery Hollow into a wasteland of ice. The only snow was when I created it or a snowstorm blew in.

I watched Ameria dance around like she didn’t have a care in the world. Which was just how Mom and Dad liked it, so I kept her busy with play and making happy memories. Her white-blonde curls bounced around her shoulders as she ran around me.

A cold, knife-like breeze whipped by. With it was a scent I was familiar with. We’d have to move on soon. I could feel it. The eerie dark magic I associated with the princess and her guards we called her familiars started to settle in the crisp air around me.

Yeah, we’d have to move tonight.

“Roshia!” Ameria yelled, her hands propped on her little hips and her foot tapping on the frozen ground. Her blue eyes narrowed, making me laugh. She was a miniature image of our mother. And just as fierce.

“All right, all right.” The fake pout on her tiny face was too much for me. She knew I’d cave. “Ready?”

Ameria let out another squeak and clapped her hands. My heart swelled. I wiggled my fingers while calling my ice magic, forming frozen snowflakes. I suspended them in the air for a few moments just to watch her jump up and down with eagerness. Then with a wave of my hand, they twirled and pranced around Ameria’s head. While she was busy dancing with the snowflakes, I conjured a small snow cloud overhead large enough to cover the small clearing we stopped to rest in. Perfect, fat, white snow drifted down, joining in the dance.

My mom came over and hugged me. “Your magic is growing stronger. I’m pleased with how you have learned to control it with such ease.”

I beamed and my heart filled with love. My mom was one half of a whole—a fated pair to love each other for all their days. While she had long white hair, my father’s was short and dark. Side by side, they appeared to be polar opposites. But I could see how their love bound them like they were meant to be.

“Of course, she has. She is my daughter, after all.” My dad ruffled my hair before leaning in for his own hug and kiss on my temple. I hugged him back, inhaling his rosemary scent.

Just then a snowball hit me in the back of the head while my brother, Taegan yelled, “Show off!”

Narrowing my gaze at him, I formed my own snowball with my magic and let it grow to be about half the size of Taegan. He chuckled and backed up, shaking his head. “Ro, don’t do it. You know I love you. Right, little sis?”

I laughed, making it sound as evil as I could before tossing the large ball of snow at him. His eyes went round before narrowing into slits of mischief. He lifted his hands and sent a blast of air like a spear. Snow exploded around us.

We laughed while Ameria squeal and clapped behind us.

Taegan’s magic allowed him to manipulate air. We were quite the team when fending off Princess Crystal’s malum—blood thirsty, insane changelings. I shivered at the thought. I hated the malum. We always had to be on alert for the creatures.

A snowball hit me in the chest, followed by a giggle from behind Taegan. Ameria stuck her head out from behind our brother’s legs. Guilty little she-devil.

I wiggled my fingers at her and she squealed, dashing around to Taegan’s other side. Her white-blond curls bounced as she ran. Like he would save her. Tae was always on my side.

Suddenly, she jumped out and waved her hands in the air. Her excitement made it hard to pretend to be mad. “Freeze the air!”

This was going to be fun. Tae and I locked gazes, the corners of his lips curled up. Then he lifted his hand and swooped them to the side. A gust of air burst to life and as soon as it did, I threw out my own hands, freezing the streams of wind. Lines of ice curved in midair. A few spiraled in different directions. It sparkled in the sunlight.

Ameria clapped and jumped up and down. Tae came over and leaned into me with his shoulder. I sighed. It was easy to forget the dangers of Crystal and her familiars at times like these. But we had to be on alert, always.

Laying my head on Tae’s shoulder, I watched our little sister play, running in between the frozen swirls of air.

“I heard rumors of a rebel group of fae, human, and custos in the North Mountains. I think we should head there next.” Taegan spoke softly like he didn’t want Mom and Dad to hear him. He was always checking with me before he made a suggestion to our parents. It wasn’t like asking for my permission.

He was two years older at twenty-one and had the authority to speak for Ameria and me. However, he respected my opinion and always liked to bring me into family brainstorming and planning.

I lifted my head and studied his profile. “I’m assuming you believe the rumors?”

He shrugged. “More than one source had said it. Though, it’s mostly whispers between people as I pass by. I overheard a woman in the last village we stopped at talk about moving her family in that direction.”

“It’s a possibility. The North Mountains are tough to make a home out of, though.” Or tougher than it used to be, before Crystal’s reawakening. The lower mountains were covered in ice and snow but the caverns may be livable. However, they could also become a trap when the familiars came around. “The high mountains would be safer, but how are the conditions? Could we make it a temporary home?”

“Not sure. I’m going to check it out. But you need to help Mom and Dad with finding a safe place to lie low. I’ll meet up with you in a week or so.”

Panic seized me and I grabbed his arm before he could walk away. “You can’t leave us. We’ll all go. We have to stay together.”

I didn’t realize I’d clutched his shirt in my fist until he pried my hands open. “It’s safer if I go alone.”

“No­–” I froze as the hairs on the back of my neck rose and the inky residue of dark magic settled around us. My eyes widened as I met Tae’s. His expression mirrored my own. Fear burned my insides. “Run!”

My scream echoed around us. Ameria ran to our parents while Tae and I formed an ice barrier between the familiars and us. Tae called to the wind to blow a thick dusting of snow from the ground to eight feet into the air as he ran north. I followed on his heels, freezing the mix of wind and snow, forming a wall at least a foot thick.

It wouldn’t hold them off long, but enough for us to escape. I hoped.

A quick glance over my shoulder and relief eased some of my tension. Mom and Dad had Ameria and were running for the South Mountains. Unlike the North Mountains, the South were slightly warmer. I didn’t like it much, but the familiars liked it even less.

When the ice wall stretched on for about a quarter mile, Tae and I ran in the direction our family went. I fixed my gaze on my parents and sister, then movement ahead of them to the left sent a stab of panic through my heart. Familiars waited for them. We were surrounded.

“Mom! Dad!” I pushed my legs faster, ignoring the burning in my muscles. My focus was getting to my family, desperate to reach them, to protect them.