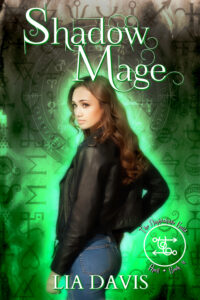 And she is celebrating with a GIVEAWAY!

You can win a 6-month subscription for Kindle Unlimited!

PLUS every entry gets a FREE eBook!

Find out more at the end of the excerpt below.

Because I like to tease my readers, here is a first look at chapter one of Shadow Mage.

Come on, Jemma, you can do this.

Failure was not an option.

Jemma Blackwood studied her opponent, indigo eyes sizing up the blonde curls and green eyes of the girl on the other side of the block wall. One wrong move and the situation would turn critical. Dangerous. Carefully, Jemma pushed a block into place, holding her breath. Prim, her familiar, hovered nearby, the pixie ready to draw the girl’s attention if she made a mistake.

The block settled into place, and the tower remained standing. Only then did Jemma relax.

Ameria squealed with delight and threw her tiny, chubby hands into the blocks, knocking the whole tower down. Then laughed as if it was the best thing ever.

All that just to knock it down. Jemma couldn’t help but laugh with the thirteen-month-old. She meant that literally because Ameria was able to push out her feelings to others. When she was happy, she wanted everyone else to be happy. It also worked the same way when she was sad or angry.

It’d been two days since Jemma had taken custody of the Elven princess, and she was quickly running out of ideas to keep her occupied. She had no idea Ameria would be so active and curious. She was crawling and wanted to explore everywhere and everything. That kid was fast on her hands and knees. Then again, Jemma had never been around kids of any age. She’d definitely never had to take care of a small child before, having been the youngest of three herself. It was interesting, to say the least, but she was woefully underprepared.

Which was why her mom was on her way. Her mom was the only person Jemma trusted to keep Ameria’s identity secret. One reason was her mom was a mage and a former member of the Nightshade Guild. The latter gave Jemma a small amount of peace of mind. Cordelia Blackwood knew how to defend herself in case things got dicey with the princess. Not that Ameria would hurt any of them, but anyone coming after her wouldn’t think twice about harming or even killing anyone in possession of the baby.

“See? I told you she’d be fine.” Prim zipped around Jemma’s head, then sat on top. “I can’t believe you’re so worried about upsetting a baby. Stop acting so scared.”

Jemma shook her head, dislodging her familiar. Pixie dust sprinkled around them. Jemma waved a hand, creating a small gust of wind to blow it away from the princess. “America is not just a baby, Prim. She’s an Elven royal, and her powers are strong and unpredictable.” She glanced at the pixie, who now hovered over the spilled blocks, butterfly wings pulsing with purple light. “I’m not afraid. I’m cautious.”

“Call it what you want,” Prim snorted, crossing her arms. Her little mouth twisted wickedly. Her short blond hair framing her small round face. “Why else would you call for reinforcements?”

Ameria crawled toward the coffee table and pulled herself up. At thirteen months, she was able to walk, but she was still unsteady on her feet. Jemma scooped her up, afraid she might hurt herself on the corners of the table and settled the growing toddler on her hip like she’d seen other women do. It oddly felt natural.

“Oh, what did I do now?” Jemma hissed under her breath as she started crying herself—affected by the Elven princess’s emotions. Prim snickered, and Jemma pointed at Ameria. “This. This is why I called for reinforcements. I thought I could handle this, but I don’t know anything about kids. Especially not magical ones who can control the elements and other’s emotions.”

Her mom only lived an hour away and had been more than willing to come when she called. Jemma was grateful; she didn’t want to be the reason the princess’ safety was compromised, and part of her job included keeping the kid’s power under wraps. That was impossible when she didn’t know what Ameria wanted half the time. The last mage told her that she would occasionally put images in their head to get her point across, but luckily Jemma hadn’t experienced that yet.

Ameria’s cries grew louder, tears streaking her reddening cheeks. Mind scrambling for ideas, she ran to the closet and yanked out the vacuum cleaner. Prim helpfully scooped up the cord and plugged it in, then circled them.

“Is this really an appropriate time to start cleaning?” she asked.

Jemma sighed loudly, adjusting her grip on the fussy toddler. “I read somewhere once that vacuum cleaners can calm babies. Something about the white noise, I don’t know.”

Prim blinked at her, then laughed, her wings flashing pink. “I don’t think it’ll work but go for it.”

Huffing, Jemma flipped the machine on, and Ameria shrieked, throwing her head against Jemma’s shoulder hard enough to send pain down into her fingertips. Then the ground began to shake, rattling her windows. Jemma shut off the vacuum quickly and held Ameria closer, walking in circles and trying to shush her. As she paced past the kitchen, she spotted the toddler’s sippy cup on the counter.

She grabbed the green cup, still half full of the fruit juice she’d filled it with that morning and pressed it into Ameria’s tiny hands. She looked at it for a second, then threw it across the room with a surprising amount of strength. It hit the wall and the lid flew off, spilling juice everywhere. Her cheeks darkened to a deep red, making the house shake even more.

“What am I supposed to do?” the pixie yelled over the noise.

Jemma held Ameria tighter, rubbing her back. “Can you at least settle the earth before she brings the whole house down?”

Before Prim got the chance, the front door opened, and relief washed over Jemma’s nerves. Her mom half-jogged across the room to them, a tote bag slung over her shoulder and handed Ameria a white rose she’d picked from the garden. Ameria quieted immediately, her angry red face transforming back to the happy pale one she’d had only minutes ago. She giggled and shook the flower as it grew in her hand.

Jemma sat Ameria back on her blanket on the floor.

“Mom, is that safe?” Jemma followed her mom as she set the bag down and started rifling through the kitchen cabinets. “What if the flower takes over the whole house?”

Her mom gave her an amused glance over her shoulder, then got a box of macaroni and cheese out of the cabinet. “It won’t take over the house. At least not the entire house.”

Jemma glanced back at Ameria, who had a vine of white roses surrounding her. “I’m not too sure about that. Besides, roses have thorns. She can hurt herself.”

Cordelia studied the baby for a moment, then met Jemma’s gaze. “Look again. She’s smarter than you know.”

Narrowing her eyes, Jemma looked at the vine, noticing it had no thorns. Well, then. “Okay, she knows that thorns hurt. Or maybe her magic didn’t create them because she doesn’t know roses have them.”

Jemma doubted the latter was correct but analyzing the whys of Elven magic—which Jemma didn’t know jack about—was not helping the situation.

“You’ll need to move soon,” her mom said. Jemma stared at her, wondering what she was talking about. “Ameria’s powers are too strong to hide, even in your wards.”

Oh, yeah, Jemma knew that. She sat on a chair at the kitchen table where she could keep an eye on Ameria happily playing with her vine of roses. Then a jarring thought came to mind. “Did you have a vision?”

“It wasn’t entirely clear, but the message was.” Her dark blue eyes, so similar to Jemma’s but without the purplish hue, were awash with pity. “You can’t stay here.”

“Yeah.” Jemma nodded slowly, though she wasn’t overly fond of the idea. “I’d planned on leaving in a few days anyway. I just wanted to get her settled, even if it was only for a week or so. It can’t be easy for her to move from place to place. Not to mention she’s handed off to a new stranger every month.”

Her mom placed a hand on her shoulder and gave a gentle squeeze. “I know, dear, but it is what needs to be done to protect her.”

Ameria had been doing nothing but traveling for the past three months, moving from person to person while the Elven Court investigated the murder of their king and queen. She’d been hoping to give the poor princess time to adjust to her, but time wasn’t in their favor. Jemma lifted a curious eyebrow at the tote she’d left on the counter, needing something else to think about.

“Something I thought you might need to get through the next few weeks.” Her mom spun from the cooking pasta, pulled a set of colorful, plastic keys out, and rattled them. “Distractions.”

You can get your copy of Shadow Mage at Amazon: https://amzn.to/34PEqYj. 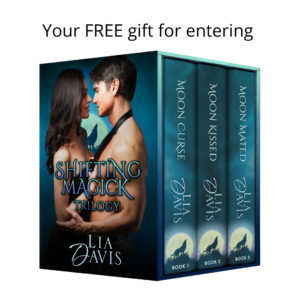 As a gift to you for entering and sharing the giveaway, every entrant will receive a FREE copy of Shifting Magic Trilogy Set