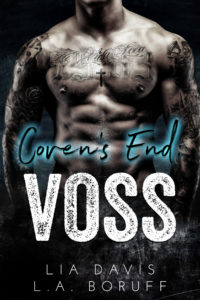 With the practiced skill of a pro, I unwrapped the tape from my hands as I slowed my breathing, bringing down my heart rate. Even after the cool-down exercises, my wolf pushed for control. The breathing helped calm the beast a little, but the wolf was always at the surface, restless. Years of training under a sadistic prick of a father had turned me into the strongest and most dangerous lycan in the U.S.

Lifting my gaze, I met the stares of the pups around me as they finagled their own tape. The class was finished, the young wolves exhausted and hopefully a bit more skilled. “Be sure you get plenty of rest tonight. I heard some of you have exams tomorrow.”

A few groans echoed around the room, and I smiled. When I took on the post as Jillian’s sentry, I’d considered giving up the class, but I enjoyed training the pack’s young.

These were the kids that, if trained properly, would make the next leaders. They’d be the sentries, the pack alphas. They’d be looked up to, listened to, and respected. If left untrained, their alpha and beta energy would drive them to trouble, possibly turn them rogue. I’d seen it before. Lived it, actually. So it was my duty to teach them the correct way to train and hone their power.

They had something I never had—a teacher who cared about them enough to let them discover their own potential.

“Thanks, Voss,” a pup called out as he left the room. He was my oldest student and would be graduating to the adult classes soon.

“Have a good night, kids.” I waved at the eight boys and two girls as they filed out the door, then made my way to my bedroom on the other side of the gym. I held the class in the basement of the High Alpha’s house, much to the kids’ awe and delight. Graham didn’t mind, either. He joined us on occasion, giving his advice to the kids. They really loved the High Alpha sharing his skills and advice on leadership with them.

As soon as I entered my room, Quin walked in behind me. “How was class?”

I glanced at him over my shoulder, then tugged my shirt over my head. “Good. We need to keep our eyes on the Fowler kid. He has a lot anger bottled up inside of him and won’t talk about it.”

Unresolved up anger wasn’t good for the wolf within. Unfortunately, I knew that all too well.

“Jillian gone?” I turned and watched him, knowing good and well Jillian had left earlier. There was only one place she’d go without Quin or myself.

He wasn’t as okay with it as he said he was. I couldn’t blame him, he’d known Jillian all her life. Probably loved her just as long.

If I was to be honest with myself, I wasn’t warming up to the idea either. Although I was pretty laid back about sharing her—much to my surprise—it rankled me that I’d be sharing my mate with a fucking vamp.

“I convinced her to stay there with him until we come back for her in the morning, at least,” Quin added, his tone a little less irritated.

“He could bring her home.”

Quin laughed and sat in a ratty armchair in the corner of my room. “She won’t risk her dad seeing her with him until she’s figured out how to tell him.”

Yeah, that could be a problem. “I don’t envy her that job.”

Graham doted on Jillian, gave her everything she’d ever wanted in life. But a vampire mate? That wouldn’t go over well with the High Alpha of the lycans.

That’s the hand we’d been dealt. Me and Quin might’ve been having a hard time reconciling it, but we’d get there eventually. What else could we do? Fated mates were impossible to ignore. Apparently the Fates had a plan for the four of us.