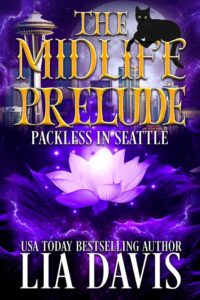 The Midlife Prelude (Book One)

Omega wolf shifter, Matilda Carol, is about change her life forever. Starting over at forty-five isn’t the scariest thing she’ll have to face in her new life. But she’ll pay any price to gain her independence. Even if it means she has to die in the process.

Faking her own death and moving away from the only home she’s ever known is intimidating, to say the least. Especially when Mattie has been sheltered and controlled by her uncle all her life. It’s a good thing that her BFF, Julie, is a powerful fae with connections to several paranormal factions that have all sworn to keep Mattie hidden from her uncle.

When Julie goes missing, Mattie will not rest until she’s brought home. But she’s never investigated a missing persons case before—or any other case.

When the police can’t find any trace of Julie, Mattie does her own detective work with the help of a vampire king, a witch, and a mysterious hottie who stirs her inner wolf’s mating urge. Wow. She didn’t see that one coming.

Mattie may be packless in Seattle, but she’s in control of her own destiny for the first time in her life. She’s not about to waste this opportunity.