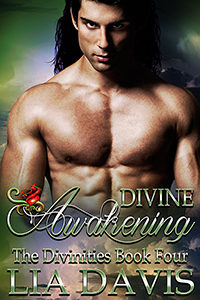 A mother’s love is her greatest power.

Divinity witch, Desiree Sanders has made a lot of bad choices in her life, but trusting the demoness, Samoan should earn her the award for traitor of the millennium. After several failed attempts to set things right, Desiree turns to the dark, sexy Death Demon, Lex for help saving her son and ending the war.

There’s no darker place than the soul of a demon.

Divinity guardian, Alexander, AKA Lex, has hardened his heart and locked away emotions following the betrayal of his mate over three hundred years ago. Until he meets the quiet and beautiful Desiree, and the walls around his heart start to crumble. When she calls him for help, broken and scared, he can’t deny her, and the urge to claim her for his own becomes an overwhelming need.

Trapped in the Underworld as the war between witches and demons escalates, Lex and Desiree must face their pasts and their fears—and open their hearts—if they are to find a way out. Meanwhile, the Divinities in the natural world prepare for a battle that is no longer just dark versus light. If lost, it could mean the end of life as they know it.

“How long?” Lex snapped the lock on the cage with quick efficiency, not surprised that Khan had set the trap. One reason it was so quiet and they were able to get in without Regal guards coming down on them. Should have known.

“Not sure. Maybe two minutes or less.”

Fear gripped his heart and squeezed. They had to get out of there. He wouldn’t lose Desiree when he’d just found her.

Desiree moved to the opening and stuck her head out. Lex moved closer to her, too aware of her whirlwind of emotions: Anger, fear, and a desperate need to find her son. “Bear, go find your brother and get out of here.”

“What are you doing? There’s no time.” The hound paused once they’d exited into the hall.

“We’ll get out. Get Teddy, Zach, and Lydia out,” Lex barked, then grabbed Desiree’s hand and tugged her down the hall in the opposite direction that he’d sent Bear. A growl at his back was Bear’s final protest before the hound took off to find the others.

Desiree tensed up next to Lex but didn’t jerk her hand from his. In fact, she seemed to accept his touch with ease, like it helped soothe her anxiety. Good. He needed her touch just as much. Needed to know she was safe.

Her power was close to the surface, nipped at his own. He ignored it. “Can you sense Mathew?”

She trembled at the mention of her son’s name and shook her head. “For a moment, I thought I could. But he’s not here. At least, not anymore. We need to get out of here.”

She didn’t need to tell him twice. Focusing on his home, he teleported them. Materializing in his living room, he released Desiree’s hand and stalked to the bedroom, needing to put some distance between them. The female made him ache with need. The urge to take her in every way possible was almost overwhelming.

Fuck. He didn’t want a mate, yet he’d found one. The pull to Desiree was too strong. He wouldn’t be able to keep his hands off her much longer.

Boom! The house shook from the blast of Khan’s castle. Closing his eyes, he searched for the connection he had with the hellhounds. Relief flooded him when he felt them, alive. They made it out.

Suddenly, a rush of power rippled across his skin, and he whirled around to meet Desiree’s stare. Standing in the doorway of his bedroom, wide-eyed she said, “All the portals just opened.”

“Hecate,” he called out.

She replied back telepathically. “I felt it, and I’m handling it. You have to find Khan and get the Dark Sinew from him. However, once I close the portals you’ll have to find another way to return Earthside.”

Then the goddess was gone, cutting the telepathic connection. He sighed. She’d have to use the power of three plus the Sinew to close all of the portals. As far as he knew, no one but the gods could cross from one realm to another once they were locked. But Hecate had said to find another way out.

He had no idea how to do that.

Returning his attention to Desiree, he said, “Hecate will be closing the portals. We will be stuck here for a while.”