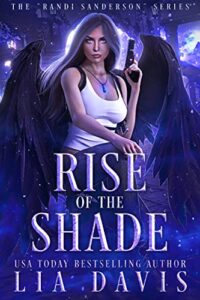 Available at Amazon I Apple I Kobo I Nook I Google

Murder is a game that Randi Sanderson knows far too well, but at least she’s playing on the right side of the law. Being half-archangel and half-vampire makes her one of Jacksonville Sheriff Office’s best detectives, and a suspect’s worst nightmare.

When she arrives at the scene of her next case, it’s obvious this murder isn’t a typical human crime of passion or rage. As a powerful hybrid, Randi can sense something is off, and not just because the body was dumped in a church parking lot. Luckily, her many gifts include the ability to dig up dirt on anyone.

This time, getting to work won’t be so simple. Surprised by a new partner, Randi knows her life is about to get a little more complicated. There’s a reason she doesn’t work with others. To the outside world she’s just a police detective and single mom, but the reality is she has a secret identity to keep.

With the case taking a dark turn and her new partner obviously keeping secrets of his own, the last thing Randi needs is more trouble. So when the angelic and demonic factions start bidding to hire her to kill other supernatural beings just like herself, she patently refuses. The rogue hybrids known as The Shade are none of her concern, and she isn’t interested in becoming an assassin.

But when she finds herself in the middle of her own case with The Shade coming for her, she must reconsider. The half-angel, half-demon miscreants won’t stop until they’re dead or they have what they truly want: Randi’s son.

Goodreads reviews for Rise of the Shade

“I’m Detective Bennett,” he introduced. “Cash Bennett.” As we shook hands, his strong grip encasing mine, he added, “Your new partner.”

Cash smiled, forming a dimple in his right cheek. “It’s a pleasure to meet you.”

He chuckled mirthfully. Not the reaction I anticipated. “Technically my first day is supposed to be tomorrow, but the chief called to suggest I come down here tonight to meet you. He thought you could use the help on this case.”

I scrutinized his eyes with my own, trying to read past them. With our hands still clasped, I attempted to enter his thoughts, perusing hidden motives. Perhaps it was the exhaustion of the hour in concert with the previous use of telepathy, but I hit a wall. A twinge of pain throbbed at my temple, and I winced, releasing his hand and pressing my fingers to my forehead.

I waved away his concern with my free hand. “Just a little headache, it’ll go away in a minute.”

“Here.” He wrapped one hand around the back of my neck while the other pressed against my temples and both massaged. Tension immediately drained from the muscles in my neck and the headache receded. I sighed with relief until our eyes met again and I glared back.

Cash retracted his hands and stepped back, hanging his head. “Sorry, old habits.”

I squinted one eye. “Old habits?”

He scratched the back of his head, bending his toned, muscular arm to do so. I refused to look. “I worked briefly as a massage therapist before entering the force.”

I crossed my arms. “Interesting pivot.”

“That was the conversation closer, not an opener, young buck,” I said, tapping his shoulder while passing him. I came to stand above the victim, staring down at her soft face. “At this moment, I’m not so much interested in your life story as I am Catherine Jacobs’s death story.”

Cash stepped up beside me. “Young buck?” he repeated. “I’ll wager I’m older than you.”

“How old are you?” I asked, turning to face him.

He peered down from his six plus feet of height. “Forty.”

“Only two years, hot shot. And in terms of experience, you’re still the young buck around here, capiche?”

Cash only grinned back.

I sighed. “Chief sent you down here tonight, huh?”

I shook my head, turning away from him. “Mark, you cheeky sonova—”

“Said you’ve got a lot of experience. Said I could learn a lot from you.”

I smirked, turning back to Cash. “A little flattery to help swallow the pill, hm?”

Cash shrugged. “You and Chief Dobbs go back?”

“To diapers,” I told him. “He seems to think I’m still wearing them.” I pulled out my phone and shot off a quick text to Mark: “You think you’re funny, don’t you?”

Before I could pocket the phone again, his reply popped up on screen: “Detective Bennett is good police.”

I glared at the screen. Mark was lucky not to be in my presence. “Good or not, you know why I can’t be partnered, Mark,” I shot back.

There was a moment’s break in the conversation, a silent recognition of the fact. Mark knew all about me, knew my parents, knew the secret we kept. He was human, but a trusted one. A few allies in positions of power helped keep everything on an even keel. Three dots popped up while he typed his brief reply: “Play nice.”