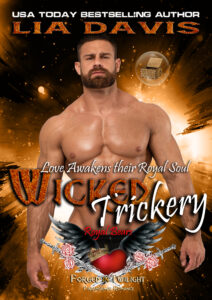 His Royal Highness bear shifter, Rylan Artio is stuck, cut off from his magic and his home realm—cursed by Lucifer. Along with the royal three from each faction, Rylan and his brother and sister are on a mission to search for a talisman. A music box.

But finding the magical object is only one step in breaking the curse. Rylan and his siblings must find and bond with their fated mate. That’s harder than one would think because fated mates are a once-in-a-lifetime kind of thing.

However, Rylan met his mate years ago, but she seems to always evade him. It’s a good thing that Ry is a persistent man. His patience paid off.

Now that he has Tessa under his roof, he isn’t going to let the trickster goddess go. Tessa Turner is his and she’ll soon find out what it means to tangle with a bear.

Tessa is half trickster god, half human. It’s her humanity that saved her from the curse. Well, saved her isn’t quite right. She may have her magic at full strength, but her mate is a bear prince who must claim her as one of the steps in restoring his magic.

It seems the Fates think she has run from her destiny for long enough.

There’s more at stake than her insecurities about mating and her trust issues. She isn’t going to let the devil play god. If that means mating with the gorgeous bear prince and facing her past to get the talisman back, then that is a sacrifice she’s willing to make.

Besides no one ever dies from falling in love. Do they?

Rylan’s bear released a roar that shook the house and made the kids squeal while running in different directions. He almost laughed as the three cubs giggled while finding hiding spaces. The hunt was on.

Ry’s large paws pounded on the floor as he gave chase, choosing his nephew as his intended target.

Nephew. Who would ever believe that his younger brother, Arric, would have a son? Certainly not Arric. That was a bombshell dropped on them all shortly after Lucifer cast his curse on all the factions. That curse had stolen Ry’s, Arric’s, and their sister’s powers. It also sent them on a wild chase to find a music box. But the box was only one part of breaking the curse.

Each of them had to find their mate and bond with them. Arric had completed the mating with Mason’s mother, Brie. Now it was Rylan’s turn since his mate lived on the Artio property for her own protection.

Ry chased Mason down the hall and into the great room on the first floor. Suddenly, Mason stopped and turned to face him. Rylan skidded to a halt and watched the five-year-old. Being half bear, half nephilim made the sneaky little man unpredictable.

Mason also had a lot of his father in him. No fear and all alpha. Okay, so that also described Rylan and their sister, Tamsin.

“Get him!” Mason shouted right before he shifted into his bear. Then two identical cubs leapt from their hiding places, heading straight for Rylan.

Rylan stood his ground, trying to intimidate the little bears in the Artio mansion. It was no use. They were fearless. The twins were the daughters of an enforcer, so they followed Mason’s command on instinct.

The three bear cubs leaped in the air and came down on top of Rylan. He dramatically fell to the floor. His bear would rather chew his own paws off than to harm any of the kids.

He faked struggled for a few minutes before making his escape and climbed the stairs to the second floor. Only when he was in his room did he shift to his human form.

I irked him to no end that he didn’t have his magic to conjure clothes to cover his body. He had to remember to bring a change of clothes when he left the house, especially when escorting clients around.

Not having his full powers made it a little more challenging to protect those who paid the Artio Security Agency for their services.

No thanks to Lucifer and his damned curse.

Rylan, Arric, and Tamsin were working to break the curse. They had help, of course. Brie and her sister Tessa were working just as hard to find a talisman—the music box—that was the final piece in breaking the curse.

The thing Rylan found interesting was that Brie and Tessa weren’t affected by the curse. The females said it was because they were half human and didn’t belong to one of the many factions. That made sense because Lucifer’s curse was intended to weaken the factions. Rylan wasn’t going to point out the flaw in the devil’s chant.

At least he and his siblings had some magic on their side. It just wasn’t Ry’s magic.

After dressing in a pair of faded blue jeans and a dark purple t-shirt, Rylan headed downstairs to hunt for his mate.

Tessa was in the library researching spells. She was looking for a way to magically find the talisman, a music box Mason was playing with when the curse was activated.

Tessa had the music box, but it was stolen away by an evil demon bitch. Katrina placed some kind of trickery spell on the box. Every time Tessa got close to finding it, it would disappear. It was stuck in a continuous magical loop. Tessa almost killed herself trying to get the damned thing.

Rylan was going to make sure she didn’t do that again. The stubborn female was going to learn to let him help search for the box and keep her alive.

After all, the half-trickster goddess was his true mate.

He stopped in the doorway of the library and admired her beauty. Her black hair was piled on top of her head in a messy bun. Strands of her hair had escaped from the bun.

She was beautiful and chaotic and all his.

Books were scattered all over the round table she sat at and on the floor around her chair. Some were opened while the rest were in piles

Her brows knitted together as she wrote in a notebook, then scanned the book in front of her again.

Moving further into the room, he asked, “How is it going?”

She said that two weeks ago, but he wasn’t going to tell her that.

He took a seat across from her at the table and looked over the books she had open on the table. They were old volumes of magical texts. Most of them he was sure weren’t in their library before Tessa arrived.

“Do you know who your parents are?” He watched her carefully while he kept his voice as uplifting as he could. He wasn’t being rude or insensitive.

Tessa was adopted by Brie’s mom, Joan, when she was a toddler. The females grew up together and were closer than most biological sisters.

Tessa didn’t look up from her note taking. “My dad was human and died when I was two. I don’t remember him, but Joan was friends with him. So, that would mean my mom is a trickster goddess. I’ve never met her.”

She worked her jaw when she said the last statement. He watched as her aura darkened briefly. Just as fast it returned to her normal pale purple when she was focused or relaxed.

Not wanting to be insensitive, he covered her hand with his to make her look at him. When she locked eyes with him, he asked, “Have you looked for her?”

Tessa hardened her stare. “No. And before you ask your next question, I have not been to the gods either. I don’t know where to start with them. Each pantheon has its own realm and there are too many to research which one my mother was from. We don’t have that much time.”

There were rumors that they had a year to complete the matings and find the talisman and take it to the dragon king. No one had confirmed that rumor, but none of them were taking any risks. The sooner the better.

After a few minutes of a comfortable silence, Tessa let out a heavy sigh and sat back in her chair. “I feel like my eyes are going to cross.”

Rylan stood and offered his hand. “Come on. I’ll fix you something to eat and we can go sit by the fire.”

The sun had set and the temperature dropped. February in Sin City was usually mild, but lately it had been unseasonably colder. Rylan’s bear loved the cold, but he could tell Tessa didn’t.

The mention of sitting by the fire made her smile. He loved it when she smiled.

She placed her hand in his and stood. “I could conjure us something.”

He frowned. “I’d rather make something for you. I snacked with the kids earlier, so I’m good until dinner.”

She was about to say she could wait until her belly rumbled. He pulled her out of the library and straight to the kitchen. “You haven’t eaten since breakfast, so no arguing.”

When he glanced at her, he noted that she was hiding a smile. Maybe seducing her would be easier than he thought.