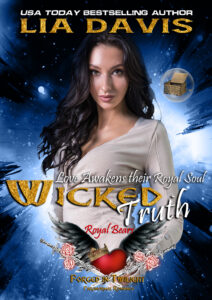 Coming in August to Amazon

Bear shifter heiress Tamsin Artio is feeling the pressure. The last stage of breaking the curse placed on the factions rests in her hands. Normally she would step up and take one for the team.

She can’t fix anything by finding her fated mate, because her mate died over twenty years ago.

Malaki Bowen is searching for answers. Living off the grid, he doesn’t have much contact with people, nor does he make it a habit of carrying on conversations. But when he lost his powers, he knew it was time to work on his people skills.

Since he left the security of his mountain he’s been tracked by an unknown assassin. He’s spent months on the run while making his way to Sin City where the three bear royals were rumored to live.

His mission: outrun the assassin and finally claim his mate to end the curse.

Nothing is ever simple. And facing Tamsin for the first time since they were teens will kill him. That is, if Tamsin doesn’t kill him herself after she learns the truth.